The Oracle Year stood out as an intense thriller about a man who suddenly saw the future. However, it failed to capture and hold this reader’s interest for long.

Oh, where do I start? I hate writing negative reviews; I do. Nevertheless, I cannot force myself to like something just because I feel bad.

Needless to say, I was not too fond of The Oracle Year. However, it had such a promising premise that led me to buy the novel. A man wakes up and has over a hundred premonitions spanning three years in a single night. Since bringing to life his online persona as “The Oracle,” he has attracted the attention of some very powerful people.

I was drawn to that, drawn to the story, and I wanted to see how it would play out.

Unfortunately, I checked out on page 106. The pacing was just so slow, so tedious slow.

Yes, no one knows whom he is except his best friend helping him make money off selling his premonitions. It is not a scam; his premonitions have proven to be true. However, when the story shifts to the FBI agent, a TV priest, and then to this reporter, and then to his friend, I was bored.

There was not enough to make me care about these other characters, and their story arcs did not raise the narrative’s tension. One would think the tension would rise with the development of the FBI plot, but again, I did not care for the story, and it just did not make sense to me as a writer why the government was so interested in finding out who he was. They reasoned that his existence was threatening to the reelection of the president. I mean, really? It was boring.

And the reporter? I could not understand why her need to write about the Oracle was essential to the plot. It seemed superfluous.

And his best friend? Honestly, I could care less about his personal life because it added nothing to the story again.

I was just wholly disappointed in the narrative. I liked the main protagonist because he seemed like a decent character. He was just a bassist who worked gig to gig and then suddenly could see the future. He has so many doubts about making money for them making him genuinely come off as a good guy, a well-written one.

However, all the others I could have done without. I did not hate them, but I did not love them either. I was indifferent about them and was uninterested in reading their plot lines.

I tried, tried to like The Oracle Year, read it, and avoid the dreaded DNF pile. However, unfortunately, this book was a bore with slow pacing and uninteresting characters. 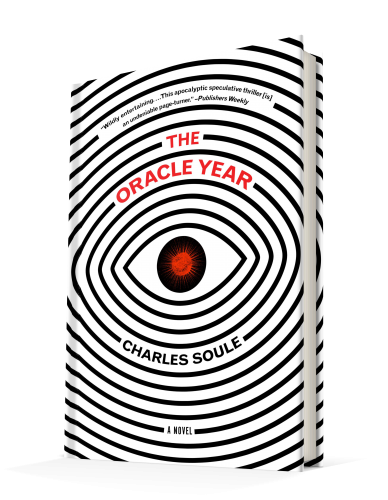