Pittacus Lore, the author of the best-selling Lorien Legacies series, is back in with Ashfall Legacy, an all-new adventure with — you guessed it — aliens.

Ashfall Legacy was excellent. Lore is familiar territory for me. I read and enjoyed the Lorien Legacies series and even liked the first novel of the Lorien Legacies Reborn series. They were entertaining. However, I will admit, when I picked up this novel, I was worried it would feel the same as those novels, just another rehash of something they already did.

Sydney is half-alien from his fathers’ side. When he was a child, his father went back into space on a science expedition and never came back. So when someone came after Syd, his human mother took him on the run, and together, for ten years, they have been on the run not from the human government but the alien one.

It turns out everything was just a misunderstanding, and when Syd and his mother reconnect with his fathers’ side and discover he may be alive, just lost, Syd agrees to head into the vastness to find him.

See? Entirely different from the Lorien Legacies. Syd has to deal with being half-alien and half-human, and on an alien planet where half the people look down at him, and the other half revere him, Syd is trying to figure out where he belongs.

However, more importantly, he is also trying to find his father and piece together this prophecy a gold space dragon gives him.

Ashfall Legacy is also enjoyable because Syd’s voice is enjoyable. I should note that I went back and forth between listening to the audiobook to reading the actual novel here. Mother of two, have to make do. Nevertheless, I think this influences how interpreted the novel’s voice.

Syd has a great voice. However, I am so happy that he is different from John from Lorien Legacies. These two could not be more different. Sure, they were both on the run, but for very different reasons with very different upbringings.

He must face a lot of tension, prejudices, and even tough decisions throughout the novel, but they give him depth. We, as a reader, can connect to him as the story unfolds before him.

Ashfall Legacy is an excellent start to a new series. This feels like Lore’s writing, but it holds a new adventure that feels fresh for the reader. Besides, who does not love space dragons? 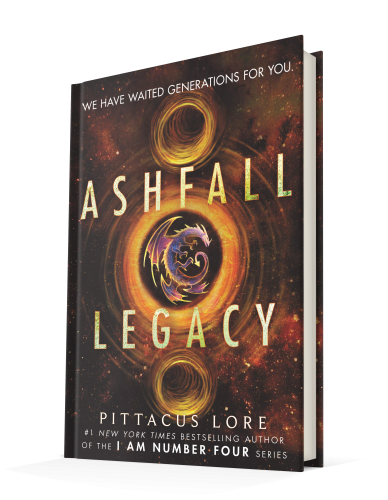