Fate of the Fallen delivers a fun and exciting epic fantasy that flips fantasy tropes on their heads, giving readers an unpredictable read.

Fate of the Fallen was not what I expected at all. Word of warning, there are spoilers in this review.

The story starts far into the future with an older man telling a group of children a story of when the dead walked the earth. This is where our story begins. We meet the heroes Mathias and Aaslo, one of whom is prophesied to save the world from darkness. Without him, everything is doomed. They say that a lot, especially when our prophesized hero loses their head in chapter three.

Yes, readers, the chosen one loses their head at the story’s beginning! Talk about unexpected delight. Hey, I warned you there were going to be spoilers ahead.

From here, our forester takes on the charge in search of someone who will replace his best friend and brother as the hero. However, everyone has pretty much given up, forcing our hero to be, well, the hero.

It is fun and truly delightful to see this story unfold because it does not unfold in the way you expect it to at all. The band of heroes, if you can even call them that, should not make sense, but it does. They evolve together, pushed together by the extraordinary circumstances that have unfolded.

However, the story could have been much different if the character’s voices were not so alive. Admittedly, this is one of those novels I went back and forth between physical and audiobook versions. When I started reading it, the narration in my head was somber, more serious. It was not until the first switch to the audiobook that I realized I was reading it all wrong. I was taking the story too seriously. However, once I began reading it the way the audiobook was recorded, I found myself enjoying the story so much more.

The characters have so much life in them that I was missing. I was reading this with seriousness rather than with the humor the author imbued into her storytelling and characters. Once I moved past that, I enjoyed the story more than I was when I had first started.

I was laughing more, which made going back and forth between the two easier.

Fate of the Fallen is a great novel. However, keep in mind that when you are reading it, do not take the story so seriously, or else you will miss the humor that Kade layered into her storytelling.

Fate of the Fallen 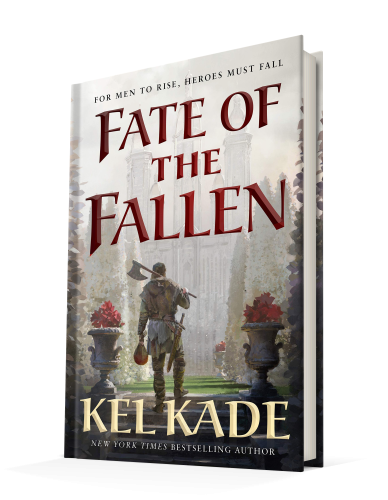