Set in the early 1900s, The Witch Haven follows young Frances Hallowell on her quest to solve her brother’s murder once she discovers she’s a witch.

A Historical Setting Filled with Relevance

The Witch Haven takes place in New York City in 1911, which is an exciting place for the story. I love a good historical setting, especially one that includes witches. It helps with the atmospheric building, and in the case of The Witch Haven, it did an excellent job of building up that atmosphere.

Francis lives in a time when women were treated less than. Back then, a woman’s voice had less value than now. The truth can be said for Frances, whose mother was taken away after her son’s death, Frances’s brother. This left her without a home and many options. Luckily, she found placement as a seamstress, a job that gave her a home and money. However, it could not protect her from her lecherous boss. In her desperate need to defend herself, her power awakens, killing her would-be attacker.

Smith highlights the limitations of women with her story. Through Frances’s entrance into the Haxahaven academy, she learns that having magic does not mean having power. The school, run by “proper” women, threatens the young girls into submission and takes away their voices the way society has. Haxahaven teaches the girls to be seen and not heard and limit themselves to housekeeping and chores.

But Frances, Maxine, and Lena want more. They want the power to be heard and defend those they love. And that tone in the storytelling speaks volumes and connects to the reader in a relatable way. The story goes the way of giving the girls the tools they need to free themselves of those limiting shackles and be heard across the pages.

The Witch Haven carries this theme of self-empowering through the characterization. Again, the intense atmosphere seems to bleed off the characters. It is easy to imagine Frances’ grief bleeding off her and into the fog that litters the New York City skyline. The reader can easily imagine it, can feel it through her tone and narration.

Frances is dealing with her grief, with her position as a woman. Through her rage, the reader sees the injustices done to women by limiting their voices. So many people look down on her, so many people think less of her because of her gender.

Maxine may have money, but money does not give her power. It does not give her the freedom to live her truth outside the shadows. Instead, Maxine’s life is filled with restrictions and shackles created by her family’s money that prevent her from truly living.

“Women are supposed to be competent at everything, but experts at nothing. Haven’t you heard?” Her voice is thick with sarcasm, but the tiniest smile breaks through the gloom.

Those are some of the most compelling lines in the novel, and they highlight the injustices done to women and Native Americans in such a powerful manner, highlighting the strength of these characters.

The Witch Haven is not without its ups and downs. The romance between Finn and Frances is a little unsetting, but it is supposed to feel that way given the story’s direction. But then there is Oliver, who begins as such a minor character unexpectedly grows by the end. Although honestly, given the nature of the story, I could have done without Oliver, I did not think he was essential to the narrative, but I was not upset with his inclusion.

This was a well-written novel with strong characters whose emotions bleed off the pages. Paired with a great historical setting, the story develops fascinatingly, leaving the reader wanting more. 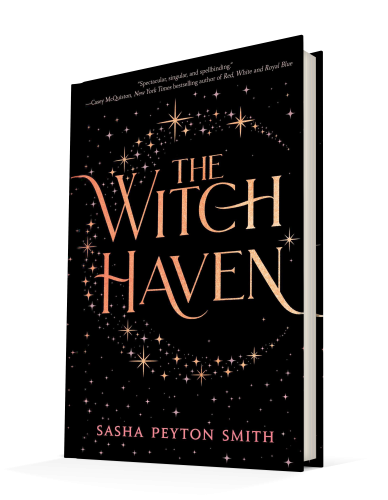