The Library of the Dead follows Ropa, a teenage girl who works as a ghost talker to investigate the disappearance of children in the “magical underside of modern Edinburgh.”

The Library of the Dead follows a young girl who can talk to ghosts. It is supposed to be similar to The Sixth Sense. Ropa gets paid to pass on messages from the dead to the living. When a spirit of a mother contacts her about her missing son, Ropa begins her journey to find her missing son and other missing children.

Honestly, it was not a bad story. It is interesting to follow Ropa through a magical version of modern-day Edinburgh. However, the pacing is where the story lost me.

The book’s title is The Library of the Dead; however, this library has minimal mention. Instead, it is mentioned as a resource for people with magic, a secret to the rest of the world. When I picked up the novel, I was hoping for more of the library of the dead, hoping that it would play a more significant role in the actual storytelling, but it did not.

So that was a bit of a letdown, not seeing this library featured more.

The writing style also created a disconnect between me and the story. Ropa is an interesting character, but much of the writing is incredibly technical. For example, when Ropa discusses other job types similar to ghost talking, the writing becomes heavy with exposition and overly technical. I lost track of the jobs and how different they were because I don’t think they added much to the story, so I glossed over them.

I hate to admit glossing over something, but that is what happened. It was just too much information that did not add anything to the storytelling.

Then there was the pacing. The story’s pacing was incredibly tedious, given how high the stakes were. Every time there was a plot twist, I thought, “okay, this is where it picks up,” and then it never did. So then I began to think, “okay, the story has to be nearing the end now, right.” But, nope, the story kept dragging on.

I wanted to like this novel, but halfway through it, I wanted it to be over. The writing lacked some personality which, again, disappointed me. Ropa is cynical, and I usually love cynical characters, but with so much exposition, I was unable to connect to the character. I wanted more from The Library of the Dead; I wanted to see the library more, wanted to see more magic and ghost talking, but, as a whole, the story fell short.

The Library of the Dead 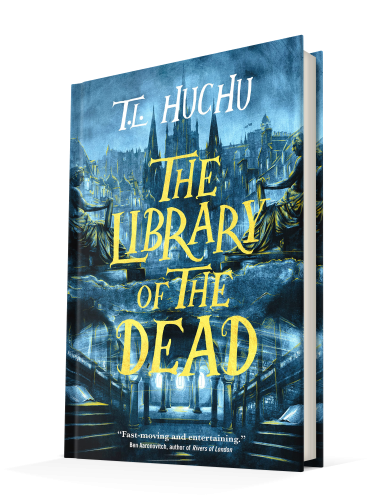