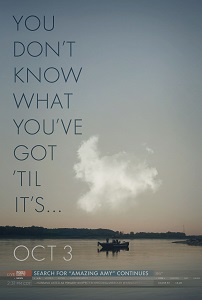 On his fifth wedding anniversary, Nick Dunne reports that his beautiful wife, Amy, has gone missing. Under pressure from the police and a growing media frenzy, Nick’s portrait of a blissful union begins to crumble. Soon his lies, deceits and strange behavior have everyone asking the same dark question: Did Nick Dunne kill his wife?

Gone Girl is an incredible film that paints a story and just dives right into it.  The story was expertly written and constructed as it follows Nick Dunne as he comes home to his wife missing and the house in shambles.  This leads the police to pick away at his marriage and unearth the events that led to his wife’s disappearance.  This leads to the course the film takes and the style and direction of the film itself.  The film begins in one way, to tell a story and set it up to paint this marriage, to paint this connection between these two characters so that viewers can see just how far this marriage has fallen.  Going back and forth, between past and present, the movie continues to build in a marvelous way using misdirection beautifully. END_OF_DOCUMENT_TOKEN_TO_BE_REPLACED

By:  Katey Rich Daniel Radcliffe is the process of managing an almost miraculous transition out of child Harry Potter stardom, and we are really, really enjoying getting to watch it happen. After launching a solid hit with The Woman In Black and then wowing Sundance audiences with Kill Your Darlings, he’s getting ready to grow up in a new way: facing a villain who might be even scarier than Voldemort. According … END_OF_DOCUMENT_TOKEN_TO_BE_REPLACED

By:  Eric Eisenberg Jake Gyllenhaal dabbled in the world of crime journalism when he starred as cartoonist Robert Graysmith in David Fincher’s brilliant 2007 crime thriller Zodiac, and today we have learned that he is ready to make his way back. Variety is reporting that the Oscar-nominated actor and Rene Russo have both signed on to star in the new indie thriller Nightcrawler. The film will be the directorial debut … END_OF_DOCUMENT_TOKEN_TO_BE_REPLACED

By:  Katey Rich After a hugely heralded premiere at Sundance in January, Shane Carruth‘s Upstream Color is finally making its way toward theaters on April 5– and with it, a man who’s been shrouded in mystery for almost a decade is making his way back toward the light. Carruth’s no recluse or even Malick-style introvert, participating in post-screening Q&As and a handful of interviews to promote Upstream, but the cult that’s … END_OF_DOCUMENT_TOKEN_TO_BE_REPLACED

By:  Eric Eisenberg David Fincher and Brad Pitt‘s working relationship stretches back nearly two decades now. The director and the actor first worked together on 1995’sSe7en, and have since reteamed on both Fight Club and The Curious Case of Benjamin Button. For a while it looked as though there was a possibility that they would be reuniting yet again for Fincher’s upcoming adaptation of20,000 Leagues Under The Sea, but … END_OF_DOCUMENT_TOKEN_TO_BE_REPLACED

By: Eric Eisenberg Those familiar with Stieg Larsson‘s dark Swedish thriller trilogy known as the Millennium series know that Lisbeth Salander is lynchpin that brings the story together and is the central focus, but they also can’t deny the importance of investigative journalist Mikael Blomkvist. Thus it was odd when a rumor popped up earlier this week saying that there was a possibility that the … END_OF_DOCUMENT_TOKEN_TO_BE_REPLACED

By: Sean O’Connell It’s a great question: Why haven’t we heard news about The Girl Who Played With Fire? David Fincher’s English-language adaptation of Stieg Larsson’s The Girl with the Dragon Tattoo seemed to kick-start a new trilogy, this one with Rooney Mara and Daniel Craig in the key lead roles. Tattoo banked $233 million worldwide, which is very good (but not enough to guarantee a sequel). And the director has … END_OF_DOCUMENT_TOKEN_TO_BE_REPLACED

By: Kristy Puchko Buckle up, gang, because with Disney buying Lucasfilm and assuring three new Star Wars movies, we will be facing an onslaught of rumors of who might dare take the helm for years to come. Movie fans have already thrown out their picks, which include such major names as Christopher Nolan, David Fincher and Joss Whedon, but now a curious rumor suggests that … END_OF_DOCUMENT_TOKEN_TO_BE_REPLACED