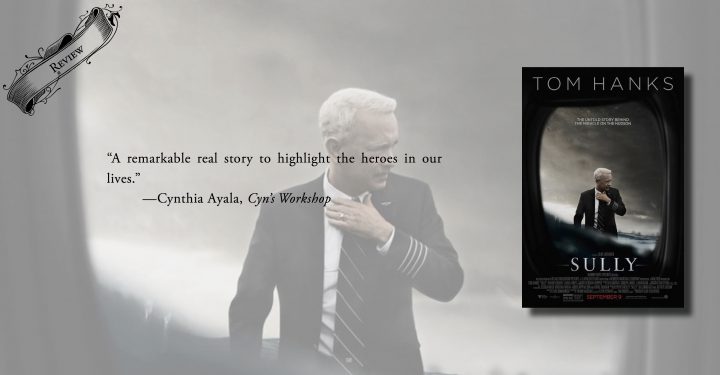 “The story of Chesley Sullenberger, who became a hero after gliding his plane along the water in the Hudson River, saving all of the airplane flights 155 crew and passengers.”

Sully is a remarkable film about a man who acted quick and ended up saving a number of lives. Recreating the miracle on the Hudson. What makes this film so amazing isn’t just the star power but it’s taking this event, this small (time wise) event and expanding on it in a very humanistic way focusing on who Sully was. He wasn’t just a pilot; he was a human being who made an impossible decision in a matter of moments, seconds really. And he was a very humble man who faced so much in the aftermath that no one knew about. And this film explored that through Sully’s story, it explored the aftermath and it explored everything this man was going through.
END_OF_DOCUMENT_TOKEN_TO_BE_REPLACED

By: Cynthia A. Directed by: John Lee Hancock Written by: Kelly Marcel & Sue Smith Starring: Emma Thompson, Tom Hanks, Paul Giamatti, Jason Schwartzman, Bradley Whitford, B. J. Novak & Colin Farrell The film centers on the life of Travers, shifting between 1906 with her childhood in Queensland, Australia and the 1961 negotiations with Walt Disney.  While in California for pre-production, Travers thinks back to … END_OF_DOCUMENT_TOKEN_TO_BE_REPLACED

By:  Eric Eisenberg English actress Ruth Wilson has managed to spend some time with some seriously great co-stars recently due to the parts she has landed. Later this summer she will be appearing alongside the likes of Johnny Depp and Armie Hammer in Gore Verbinski’s The Lone Ranger, and then in the award season months she’ll be featured alongside Tom Hanks, Emma Thompson, Colin Farrell, Paul Giamatti … END_OF_DOCUMENT_TOKEN_TO_BE_REPLACED

By:  Kelly West With the announcement that Dan Brown will be bringing his popular character Robert Langdon back for more riddle solving with his latest book Inferno, fans of the New York Times Best selling novelist may be curious to know when they’ll see the movie adaptation of Brown’s last novel The Lost Symbol. Reports say the script for the project is expected to be finished soon and … END_OF_DOCUMENT_TOKEN_TO_BE_REPLACED

By: Eric Eisaenberg Oscar-winner Marcia Gay Harden and Zac Efron are the latest actors to join the cast of Parkland, the new John F. Kennedy assassination drama that is being produced by Tom Hanks‘ Playtone label and Exclusive Media. They join a building all-star cast that already includes Paul Giamatti, Billy Bob Thornton, and Jacki Weaver. Peter Landesman, who is best known for his work … END_OF_DOCUMENT_TOKEN_TO_BE_REPLACED

Amazing movie! Spellbinding, captivating and simply amazing. This movie was so good. Here you have about five different timelines that, at first do not seem to coincide with one another but do. What also made this movie so great was the cast. Yes, it is, for the most part, and A-List cast, but also some not American stars like Bae Doona who was simply amazing … END_OF_DOCUMENT_TOKEN_TO_BE_REPLACED

By: Sean O’Connell Tom Hanks has a long history with Robert Zemeckis. The two have collaborated on wildly different projects, from the live-action Cast Away and Forrest Gump to the motion-capture animation of The Polar Express. As the two talk to the media to help promote their new films Flight (for Zemeckis) and Cloud Atlas for Hanks, we’re learning that they have a new idea … END_OF_DOCUMENT_TOKEN_TO_BE_REPLACED

By: Eric Eisenberg Justin Timberlake has spent his career bouncing between comedy and drama, making movies like Bad Teacher and Friends With Benefits alongside titles like The Social Network and In Time, and now he’s finding a middle ground with the new dramedy The Last Drop. The actor is now in talks to join the project, which is being directed by Peter Sollett, who is … END_OF_DOCUMENT_TOKEN_TO_BE_REPLACED

By: Katey Rich Cloud Atlas, the massively ambitious adaptation of David Mitchell’s novel from the directing trio of Andy and Lana Wachowski and Tom Tykwer, is set to premiere at the Toronto Film Festival in September. And while it’s still kind of hard to wrap our minds around just how they’re adapting such a complex story, Entertainment Weekly has snagged our first images of some … END_OF_DOCUMENT_TOKEN_TO_BE_REPLACED