The conclusion to the Causal Enchantment series, Anomaly brings the story full circle, but there is so much to be explored and much left out leaving this novel.  While the characterization was good, there is so much that K. A. Tucker didn’t do.  Read on for the full review. 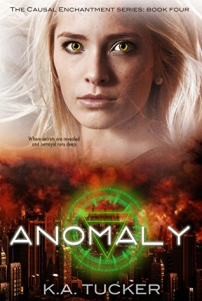 Evangeline was just a pawn in their game, until Sophie made a deal with the Fates. Once the fragile, naïve human, Evangeline has become altogether … different. A being who holds formidable power, she may be the key to changing the course of fate. Or she could be the final nail in the world’s coffin. But Evangeline doesn’t know exactly what she is, what she can do. She knows only that she has to stop an enemy far worse than the Sentinel and the sorcerers: Viggo, a man driven by revenge who is hunting the man she loves. As Evangeline fights to keep Caden alive and the human population from eradication, she can’t help but sense the imminent doom.

Anomaly is the last novel in the Causal Enchantment series written by K. A. Tucker. Although, the novel brings to story to a solid conclusion, it is, over all, lacking in the story department.

Picking up after the events of the last novel, Sophie made a deal with the Fates to keep Evangeline safe, to keep her alive and from turning into a twisted creature with the touch of death to everyone and everything. So upon her death, Evangeline was granted a wish of the Fates who are using Sophie and Evangeline as chess pieces in a game to entertain themselves.

Throughout the series, Evangeline has been motivated, has been scared, but in recent novels, her strength failed her. Tucker took away her chances for character growth in the past novels, but in Anomaly, she more than made up for it. Her newfound abilities have made her strong, but not reliant. With the threat of Viggo lurking around as well as the Fledglings that escaped mutant vampire Jonah made, there is a lot of potential for the story to develop, but in the end, the story fell flat. K. A. Tucker builds the story and develops the characters, each of them, only to deliver half-finished scenes. The reader is going to expect more, after all these are vampires in the novels, most of which are very old and two of which can use magic. Which this much available, there should have been more than just a vanishing act by Evangeline. As a character, she is still learning about her powers, and coming face to face with the man who killed her mother, her best friend and threatened her boyfriend; her emotions should get the better of her, as they have in the previous novels.

Therefore, in the end, it fell flat because it was too easy and very wishy-washy. There is no substance because everyone gets their happy ending and there is no threat anymore from any direction.

The only redeeming feature in the entire novel is the characterization. From character growth to the dynamic between the characters, the novel is rife with tension, betrayal and heartache, the only aspects that give this novel the strength it needs to hold a reader. ★★★☆☆ (C+)