A Remarkable Frame Narrative | Review of ‘The Keep’ 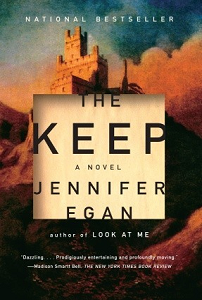 After twenty years, two cousins, damaged by a childhood prank, reunite at a medieval castle in the middle of nowhere in Eastern Europe. They are cut off from the outside world and only have each other and their friends to talk to. However, with a baroness that will not leave the land, and a haunting past, they are all lured into an environment of extreme paranoia. One man, now in jail, recounts the events at the Keep in an unforgettable story, tying the past to the present.

Published on August 1, 2006 by Anchor, The Keep by Jennifer Egan is a thrilling frame narrative set within a suspenseful gothic novel.

Egan is an incredibly clever and talented writer. This novel uses several gothic tropes quite obviously—the faraway place, the castle, the haunted past, the double—to tell a rich story within a story about two cousins and their relationship that was tarnished as children. Danny is a hipster whose life has fallen into the dumps after a very promising high school life, and as for his cousin Howard who was the outcast, his life has evolved to be nearly perfect—a wife, kids, and more money than he needs. Their lives went into very different directions, and now the Keep has pulled them back together. However, that line of storytelling isn’t particularly unique, usually ending in a case of revenge. However, Egan keeps the story captivating by utilizing those gothic tropes and a frame narrative to tell a story. A poor writer would have done what she did and made it laughable, but Egan is a strong enough of a writer to keep those obviously planted tropes from being obnoxious and laughable.

The Keep is a very imaginative story that shifts between perspectives and narratives without taking the reader out of the story. Admittedly, there is a slight jarring moment when the readers are first introduced into this frame narrative because it’s unexpected, but the writing still flows. There are two stories here that are moving towards to convergence point, but the reader doesn’t know what the final moment is going to be. There are some hints towards the direction of the story, of course, since Ray’s narrative is in the future and he is in prison for murder while telling this story. So the reader knows something dramatic is going to happen, to get to that point, and as a strong writer, Egan is a talented writer to give the audience bits and pieces of the story, while also incorporating a supernatural aspect of the story.

The story also works a powerful critique on how lost in technology society has become as of late and how connection and imagination seem to be dwindling on a societal standpoint. Both of those concepts are forgotten because advancement and technology are considered more significant than connection. Some argue that texting and being glued to phones and computers doesn’t hinder that at all but instead allows it to flourish, and on some level those arguments have fodder. However, the novel is addressing how imagination and meaningful conversations are lost in today’s technology and the way Egan does address that is with beautiful language within misleadingly simple scenes about ones’ connection with the past and the ghosts of communication.

The Keep a pertinent novel about the past and the present and at the end of the day, it’s an incredibly clever piece of gothic art. (★★★★★ | A+)