Hey, there avid readers! I hope everyone is doing well. I’m doing well myself. Work is getting hectic again as we’ve become short staffed so that has been leaving me quite exhausted at the end of the night, so I haven’t been able to make time for reading, unfortunately. Despite that, however, I’m two books ahead of schedule on my Goodreads Reading Challenge which is surprising. But thank goodness. Yet I’m still so behind on my reading. Just stacks and stacks of books around my room and my bookcase. Just keeps growing my darlings.

1. A Conspiracy in Belgravia (Lady Sherlock #2)

Being shunned by Society gives Charlotte Holmes the time and freedom to put her extraordinary powers of deduction to good use. As “Sherlock Holmes, consulting detective,” aided by the capable Mrs. Watson, she’s had great success helping with all manner of inquiries, but she’s not prepared for the new client who arrives at her Upper Baker Street office.

Lady Ingram, wife of Charlotte’s dear friend and benefactor, wants Sherlock Holmes to find her first love, who failed to show up at their annual rendezvous. Matters of loyalty and discretion aside, the case becomes even more personal for Charlotte as the missing man is none other than Myron Finch, her illegitimate half brother.

In the meanwhile, Charlotte wrestles with a surprising proposal of marriage, a mysterious stranger woos her sister Livia, and an unidentified body that surfaces where least expected. Charlotte’s investigative prowess is challenged as never before: Can she find her brother in time—or will he, too, end up as a nameless corpse somewhere in the belly of London?

Layla has never belonged to the fairy realm – at least, half of her hasn’t. She’s never known anyone with human blood, not even her father. When she was three, the dragon Fauth attacked the fairy festival, murdering her fae mum & stepfather. Frankly, some fairies think she should’ve been eaten too.

As she grew, despite being called names like “fuman” for being a half-blood, she’s discovered that being half-human isn’t terrible. She may lack magic, but she is immune to iron sickness, and she can wield a sword with elven skill.

Magic in the human world is disastrous.

Sixteen years later, when Layla’s half-sister is kidnapped and taken through a portal to the forbidden human realm, Layla rushes to the rescue. She’s older and stronger, and she’s not about to let her last living family member be taken from her without a fight.

Only someone who belongs to both worlds can find the truth.

The portal spits her out in the Royal Mile in Edinburgh, but neither her sister or the kidnapper are anywhere to be found. Stuck in a world she only knows from school books, Layla forges unlikely alliances to find her sister. As she becomes tangled in the dark world of fairy trafficking, magic harvesting, and murder, Layla will have to find the strength within if she is to survive and save her sister. 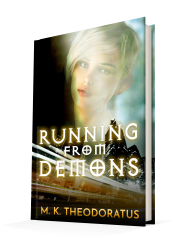 Pillar Beccon travels across Andor to discover her mother’s mysterious past. But danger is never far away as a demon seeks to destroy her.

An orphaned null without a hint of magic, Pillar can’t remember ever belonging anywhere, especially not in the Freemage commune where she grew up. After she graduates from high school, she jumps at the chance to learn why her mother ran away from her family.

During an accidental encounter, Grylerrque, a surviving commander from The Demon Wars, recognizes what Pillar is and decides to feed the girl’s life force to her clutch. The demon sends her minions to capture the girl. Pillar escapes with a help of an unexpected allay, only to learn she was pulled out of the frying pan and thrown into the fire.

Running from Demons tells the story of Pillar’s search to find a place to call her own. The book continues the chronicles of Andor, a land where the mundane world clashes with one of magic and demons from another plane prey. If you love paranormal stories of discovery and mayhem, this is the story for you.