Hello there avid readers! I hope everyone is having a wonderful week. I sure am. I’m getting a lot done with my little one here. I’m still reading to him every night and I’m watching cartoons with him in Spanish so that he’s able to learn it easier than I ever did. It’s fun spending time with my son, exhausting of course, but I wouldn’t trade it for anything else in this world.

And on that note, check out this latest reading list. Let me know what you think about these titles below and what is on your reading list. Happy reading! 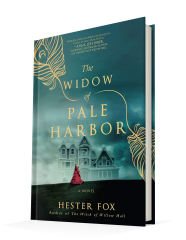 1. The Widow of Pale Harbor

A town gripped by fear. A woman accused of witchcraft. Who can save Pale Harbor from itself?

Maine, 1846. Gabriel Stone is desperate to escape the ghosts that haunt him in Massachusetts after his wife’s death, so he moves to Maine, taking a position as a minister in the remote village of Pale Harbor.

But not all is as it seems in the sleepy town. Strange, unsettling things have been happening, and the townspeople claim that only one person can be responsible: Sophronia Carver, a reclusive widow who lives with a spinster maid in the eerie Castle Carver. Sophronia must be a witch, and she almost certainly killed her husband.

As the incidents escalate, one thing becomes clear: they are the work of a twisted person inspired by the wildly popular stories of Mr. Edgar Allan Poe. And Gabriel must find answers, or Pale Harbor will suffer a fate worthy of Poe’s darkest tales.

Emilie des Marais is more at home holding scalpels than embroidery needles and is desperate to escape her noble roots to serve her country as a physician. But society dictates a noble lady cannot perform such gruesome work.

Annette Boucher, overlooked and overworked by her family, wants more from life than her humble beginnings and is desperate to be trained in magic. So when a strange noble girl offers Annette the chance of a lifetime, she accepts.

Emilie and Annette swap lives—Annette attends finishing school as a noble lady to be trained in the ways of divination, while Emilie enrolls to be a physician’s assistant, using her natural magical talent to save lives.

But when their nation instigates a frivolous war, Emilie and Annette must work together to help the rebellion end a war that is based on lies.

More than a century has passed since Liliath crept into the empty sarcophagus of Saint Marguerite, fleeing the Fall of Ystara. But she emerges from her magical sleep still beautiful, looking no more than nineteen, and once again renews her single-minded quest to be united with her lover, Palleniel, the archangel of Ystara.

A seemingly impossible quest, but Liliath is one of the greatest practitioners of angelic magic to have ever lived, summoning angels and forcing them to do her bidding.

Liliath knew that most of the inhabitants of Ystara died from the Ash Blood plague or were transformed into beastlings, and she herself led the survivors who fled into neighboring Sarance. Now she learns that angels shun the Ystaran’s descendants. If they are touched by angelic magic, their blood will turn to ash. They are known as Refusers, and can only live the most lowly lives.

But Liliath cares nothing for the descendants of her people, save how they can serve her. It is four young Sarancians who hold her interest: Simeon, a studious doctor-in-training; Henri, a dedicated fortune hunter; Agnez, an adventurous musketeer cadet; and Dorotea, an icon-maker and scholar of angelic magic. They are the key to her quest.

The four feel a strange kinship from the moment they meet, but do not know why, or suspect their importance. All become pawns in Liliath’s grand scheme to fulfill her destiny and be united with the love of her life. No matter the cost to everyone else. . .