After finishing 100 books in 2018, I only managed to read 85 this year. Many of them were great though, which made narrowing down the three best difficult. I read widely, which complicated things further. How does a serious novel compare to a book of comedic essays? A collection of poems to a book of true crime? Is craft or relevancy to our political moment more important?

I have no answers, but here are the three best books I read, followed by the others I keep thinking of long after I finished reading them. 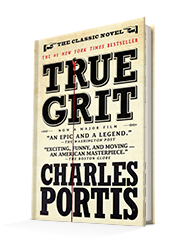 A friend told me I had to read True Grit while I lived in Oklahoma because the book took place there. Westerns are not my thing, but this book absolutely gobsmacked me. True Grit is one of the best books I have ever read.

Mattie Ross narrates her time as a fourteen-year-old girl, hunting the scoundrel Tom Chaney through Texas and unincorporated Oklahoma, where women have little power and even less respect. Her voice is compelling. Her clipped, direct sentences perfectly capture her uncompromising, grief-stricken thoughts. She enlists the help of the lawman Rooster Cogburn to bring Chaney, the man who killed and robbed her father, to justice.

2. The New Jim Crow: Mass Incarceration in the Age of Colorblindness

The New Jim Crow is probably the most important book I read this decade. The subject matter is crushingly heavy. Standford educated lawyer Michelle Alexander takes readers through the systems of oppression used to imprison and disenfranchise people of color.

The book is painstakingly researched and challenges popular ideas. Michelle demonstrates how “colorblindness” contributes to, rather than reduces racism while explaining the historical backdrop for the U.S.’s current prison overpopulation problems.

I was between the two novels I read by Kazuo Ishiguro to add to this list. No other writer captures the mechanics of genocide, as well as Noble Laureate Ishiguro does.

Never Let Me Go follows Kathy H., a clone responsible for taking care of other clones while the mega-rich harvests their organs. Kathy is heartbroken watching her friends die, and trying to find meaning in a life that will inevitably be cut short when she is called on to give up her organs.

But Ishiguro’s power comes from letting us see the mundanity of her short life. I am haunted by the image of this young woman dancing, pretending that a doll is a baby that she cannot have, alone in her room, just as Ishiguro’s other novels haunted me.

There There by Tommy Orange

The Great Believers by Rebecca Makkai

The Buried Giant by Kazuo Ishiguro

Frankenstein in Baghdad by Ahmed Saadwi

I’ll Be Gone in the Dark by Michelle McNamara.