They all know Zera is a Heartless now. Caught in the thrall of the long dead princess, Zera is again, a ploy for her masters to abuse and use. But things are trickier than they were before, and far more deadly. But Zera’s would be heart beats for the prince she has lost and she’ll do anything to get him back.

Published by Entangled: Teen, Find Me Their Bones by Sara Wolf is the second novel in her bestselling YA fantasy series.

A riveting sequel. Zera continues to be a fantastic protagonist and to follow her as she struggles with being a Heartless makes for a thoughtful read. There is much tension in the story as the previous novel revealed Zera’s truth. Not only that but the long thought dead princess has returned as a witch. Zera is a ploy, trapped as a prisoner to the princess, who forces her and punishes her at her will. Between the pair of them, there is incredible tension as they have one thing in common: their love of Prince Lucien. So, the tension is unbreakable in the novel, and it keeps the pace moving steadily, and adds to the intrigue of the story.

Lucien’s sister is keeping her plans with Zera secret, but the reader, the reader knows the little details that work in favor of the plot. By exploring the history of the creatures, and the witch’s and human, the story develops its mythology, its own type of magic to keep the reader engaged.

However, Zera’s personality is, once again, the best part of the novel. The way her narrative, her thoughts, attitude, and personality bounce off the pages makes for such an incredible read. She is snarky, but the reader knows that her nonchalant attitude is only a mask, a façade to hide away the pains she feels at being a Heartless. Zera hates what she is, but she makes the best of it, and this has taught her compassion, it has taught her strength of character, and made her even better than she was in the previous novel. There is more emotion behind her character, more heart (ironically) that lends itself to making her an incredible character.

Find Me Their Bones is an intensely driven, emotional, fun, action-packed read. (★★★★☆)

Find Me Their Bones 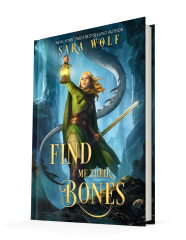