Wicked Saints is a fantasy that delves into magic more than anything else. While it is interesting, there are times where it feels as though the story lacks focus on the characters.

It is a decent story; the world-building is there, as is the structure of the two belief systems that govern these rival countries. Duncan drops readers at the height of an invasion, with a god speaking cleric being rushed away and hid for her power only to find refuge with the enemy. Their dynamics are there, they are strong, but the characters themselves come off as a little flat.

There is just so much world-building happening around the characters that they lose their voices. It is not a bad thing that there is so much care put into the world-building because with the language, the beautiful detail, the reader has no problem visualizing this world. However, while the dynamics are strong, the characters, for the most part, are flat and unmemorable.

By focusing so much on the outskirts of the story, the characters lose focus. Sometimes the reader can get lost in the detail of the story but not remember the characters, their tensions, and drives. Many side characters blend together, requiring careful reading to remember who is who at the end of the day. Their voices, tone, perspectives, bleed together, partly due to the pacing. It lags at times, using too much time to focus on the magic, to focus on the outer conflict of the story rather than taking the time to commit to the voices of the characters, their inner conflicts, making them forgettable.

Wicked Saints has just odd pacing to it. It lags where it should not and is too fast where it should slow down. There should have been more time devoted to developing the characters because they also lack development. Yes, their dynamics develop, quite strongly, but they do not feel like they are growing as individuals, they do not shine.

The magic and structure they are the saving grace because they are exciting and unique; there is God magic and Blood magic, and they are both so different and unique within the structure of the story, and that is what makes it such a good story. Yes, the characters are not the most compelling, but the plot is. Both the plot and the magic keep the reader invested in the story where the characters fail to. 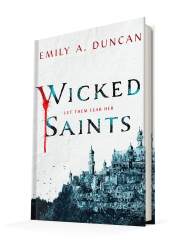