The Crow Rider is a great sequel, but it is not without its problems. The main issue in this novel is the character dynamics between Thia and Caylus. They ended up together in the previous novel. However, it was evident from the beginning that Thia would always end up with Prince Ericen, and it appears that Josephson was trying to get back to that without falling prey to a cliché love triangle.

Backed Into A Corner

Josephson backed herself into a little bit of a corner here because their breakup is too clean. There is no development of their dynamic and no hint of a breakup or that turmoil of why the break-up. They are not so different from when they met so it comes off as underdeveloped. Some real issues are going on between them, lots of inner turmoil that changes the dynamics between these two, it would have been nice to see these developed more until this point, to see their relationship fleshed out more.

Thia also makes friends way to quickly. Yes, many harbor hatred for her because of her mothers’ inaction, but the way she makes friends and breaks down those barriers verges more on the unbelievable side, too simplistic. Much with Caylus, the dynamics between these characters leave room for development. The only dynamics that get flushed out are the dynamics between Ericen and Thia. Between the two of them, Josephson develops the tension and dynamics of their relationship to its fullest.

Other than that, it was a good sequel that gives the story a thoughtful action-packed ending. Readers get to see other cultures and how Queen Razel has oppressed them. Josephson brings much diversity to the story as well as action-packed sequences full of tension. Josephson also explores more of the magic and history of this land, giving the world a unique nature.

With a fierce protagonist, The Crow Rider does, in the end, deliver a strong conclusion full of hope and perseverance. 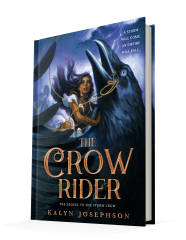