Admission by Julie Buxbaum is not a bad book, but it is unrelatable.

Admission follows Chloe, a high school senior with a rich and famous mother, a great dad, and a great life. She has finally been accepted into the college of her dreams, or so she thought. Chloe soon discovers she did not get in on her own merit but that her mother bribed her way in.

On the one hand, the reader has some sympathy for Chloe because she does try to do things the right way. She studies for hours for the SAT, works hard on her college essay, and tries her hardest. That is true, but she is still a mediocre student and does not fight her parents when they try to label her with ADHD, something she knows is untrue.

Quite simply, her parents love her, but they do not believe in her, hiding behind the facade that their actions were because they wanted to protect her.

Ripped From the Headlines

Admission is a story ripped from the headlines which is part of what draws the reader in. However, in the end, the reader does not have much empathy for the characters, primarily when a majority of the readers probably worked hard to get into college. This reader sure did.

While not poorly written, the topic simply is not captivating. It sucks for Chloe, who was unaware of what was going on, but on some level, she knew something was wrong. Chloe simply chose to ignore the obvious. Her choice to be ignorant makes this another reason the reader cannot connect to her.

It does have extensive character growth as it goes back and forth from the past to the present. Chloe’s eyes begin to widen as she sees everything her parents did to help her get into college, and it opens her eyes to all the privileges she has.

Admission is an eye-opening story about white privilege and how money and power should be used responsibly. Buxbaum deserves credit for highlighting the unfairness of the system. Furthermore, while it is well-written, it just does not have a relatable plot to capture the reader’s empathy. 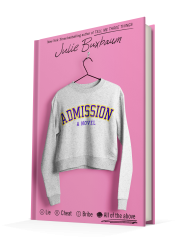