A Song of Wraiths and Ruin is a young adult fantasy by Roseanne A. Brown steeped in West African folklore. Following a grieving princess and a desperate refuge, these two fates become intermingled as they each seek the use of dark magic to save those they love.

Admittedly, the first half of this novel was a little slow. It focuses much on world-building, which is not a bad thing. The world-building is excellently done. There is a lot of color and mysticism surrounding the world, but there is also a lot of folklore and storytelling by characters.

This world that Brown has developed is thick in storytelling which does lure the reader into the story. Brown, no doubt, honors her country and her heritage with this world-building, creating a vibrant and beautiful city while also highlighting what it is like to be a refugee so far from home.

There were times when A Song of Wraiths and Ruin was reminiscent of Arabian Nights, most notably the tale of Aladdin. However, only in some essence because this story is entirely its own being. By tying the fates of Princess Karina and Malik, Brown creates a beautiful story with two distinct voices, giving the story a well-rounded form. It has the intrigue to keep the reader engaged even while the world-building slows down the pace.

Nevertheless, the last half of the novel is packed with action and character development. It is so engaging the reader will not be able to put down this novel. The tension rises, and the story increases in speed as the Solstasia festival and events continue to escalate. The magic comes to life as do the characters. Moreover, the history of Ziran continues to unfold. There is such a dark past overshadowing this great city of Ziran and it hits the reader like a truck. Brown uses history to give the story even more tension while also changing the dynamics between the characters, enriching them.

Karina and Malik grow exponentially throughout this novel. In the beginning, Malik’s self-deprecation verges on annoyance. It does not feel right to say that because he has had such a hard life, coming from a place everyone hates and from a family that did not fully accept him. However, the way he is always putting himself down to his dynamic to his older sister, it keeps the reader at a distance.

The same can be said for Karina. Still reeling from the death of her older sister and father, dealing with a distant mother, Karina finds fault with herself consistently. Karina does not believe she can be queen, nor does she want it. Nevertheless, Karina finds the strength to carry on despite the reservations from those around her. She, much like Malik, comes into herself with as much ferocity as her magic.

Both characters have powerful voices that will resonate with the reader, while the world-building and folklore will entrance them. A Song of Wraiths and Ruin is as lyrical as the stories told within the narrative, luring the reader in, trapping them until the end.

A Song of Wraiths and Ruin 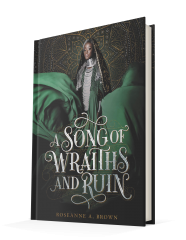