A Heart So Fierce and Broken is the highly anticipated sequel to A Curse So Dark and Lonely that, unfortunately, fell a little flat.

A Disservice to Characters

One of the more significant issues in this novel is that Kemmerer does such a disservice to Harper’s character in those few scenes she is present. Kemmerer took her best character from the previous novel and completely sidelined her. Her ferocity was diminished and she seemed more like a cliché damsel from any fairy tale.

Kemmerer made the same mistake with Rhen, who was made utterly unlikeable in this novel. Not only is Rhen unlikeable, but when the reader looks at his relationship with Harper, it is hard to understand their dynamics. Rhen listens to Harper, or he used to, and Harper, she would always call him out. Now, she seems more like a meek princess, allowing him to take cruel actions against those who would stand in his way. It is hard to reconcile who they are with how the previous novel ended, creating a wedge between the story and the reader.

And then there is Grey who has become the central character in this novel. While it Is great to see more on Grey’s personality, his whole dynamic with Rhen, his inability and refusal to just talk to his former friend, it borders on annoying. At times the reader just wants to grab him by the neck and yell at him.

It created tension, yes, but it did something to the dynamics that were so strong in the previous novel; it shattered them. Grey has run away after killing Lilith, keeping the secret of the true heir to himself, changing his name, and hiding from his former comrades. Unfortunately, this just does not fit with their dynamics from the previous novel.

That being said, it is nice to see Grey grow. Grey’s personality is initially rather stoic, but as the story continues, he does come into his own. Kemmerer gives Grey dimension; she evolves his character, allowing him to deal with the challenges ahead.

Then there is Lia Mara. Lia Mara is the oldest daughter of Karis Luran, the cold and often cruel queen of Sylh Shallow. Lia Mara is unlike her mother in every way. Where her mother is cruel, she is kind. Lia Mara tries to find a way out of battle, hoping to garner peace without bloodshed. Lia Mara is a thoughtful character who has a strong relationship with her younger sister Nora Vellin.

Thankfully Lia Mara is different than Harper as well. There was a worry that she would sort of mirror her, but whereas Harper did not like to be held back, Lia Mara allowed herself to be held back. So it is nice to see a different companion built for Grey.

There are some redeemable moments in the story where Lia Mara and Nora Vellin do not let their mother turn them against one another. Their sisterly love allows them to stay united instead of falling into a cliché. Furthermore, at least there is no love triangle here, unlike the opening chapters would have the reader believe.

Ultimately, this novel felt like a filler. It was introducing new characters, but it lost sight of the characters so brilliantly developed in the previous novel. A Heart So Fierce and Lonely lacked in pacing, dragging out some of the plot points, instead of condensing them. This novel lacks in comparison to its predecessor. The plot is not as engaging, and it lost some of those strong dynamics that made the previous novel so good.

A Heart so Fierce and Broken 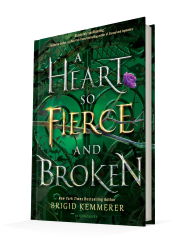