Considered a retelling of The Goose Girl, Bloodleaf by Crystal Smith is the first in a young adult fantasy series follows Princess Aurelia as she is forced to escape her kingdom when her magic comes out.

There are similarities when her friend takes over her identity forcing her to take on the identity of a servant. Nevertheless, the similarities end there. Forced out of her country and betrayed, Aurelia seeks safety in a kingdom that welcomes magic and witches.

The story moves at a good pace, developing into something far from the source material. The pacing and development of the story were well done. Smith gives the reader an idea of this land, of the politics, and the magic in the world, how it works out, giving the story direction. Using just enough detail, Smith shows the reader the structure and beauty of the land and city. The vivid detail grounds the reader in the story.

Bloodleaf is given direction through the pacing and subtle development of the story. There is evil magic at work here placing Aurelia in the middle of it. It is interesting to see the magic develop. The magic makes the story interesting because it gives the story its tension. The magic also entices the reader because it connects to the ghosts, like the Harbinger. This one ghost and Aurelia’s ability to connect with it weaves so much mystery into the story.

Bloodleaf has a great blend of fantasy and paranormal by bringing in ghost and tying them to the legends of the land. It gives the plot mystery, makes it intriguing because the reader must wonder about the ghosts and the parts they play in developing the story.

Now, while the story and pacing are intriguing, Aurelia is a somewhat forgettable protagonist. She is easy to depict, her description clear and while her dynamics with Zan and the others are well-done, Aurelia does not seem to grow. Her magic influences her sure, but she ends the same way she starts, with this desire to bring down the corrupt Tribunal. That is her central conflict in the story, and while caught up in this mystery in the hopes of saving this kingdom, it does not build up her character.

Nevertheless, despite Aurelia lacking growth, she does not lack personality, which makes the reading enjoyable. Aurelia may not stand out after the fact, but she provides the story with focus, a way to follow the intriguing plot that makes Bloodleaf worth reading. 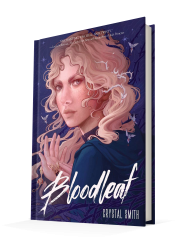