Only Ashes Remain is an incredible sequel. I said it once, and I will repeat it, I am mad at myself for not picking up this series earlier.

Schaeffer does it again with this novel, bringing back her morally questionable heroine Nita as she tries to get revenge on the boy who condemned her. Kovit returns by her side, and together they face the black-market hunters that chase after Nita.

Only Ashes Remain is such a compelling narrative, intense, and thoughtful. Nita has done much to survive now that her secret is out there, and it has changed her. Her morals, which were already somewhat questionable, have been clouded by revenge.

Her need for revenge has compromised her and blinds her. But that does not make her any less enjoyable as a character because she continues to grow, to learn. Even while blind, she begins to contemplate this idea of what makes a monster.

To Nita, a monster is not only defined by their actions but by their looks. Nita deals with unnatural’s every day who have to kill in order to live, much in the same way that humans farm and hunt animals for food.

However, does that make a monster? It is one thing to hunt for life and another thing to hunt for sport or revenge. That is what makes a monster and that is the question raised in the novel. Nita is learning more about unnatural’s; she is seeing this human side to them while the monstrous side of herself continues to come out. In the first novel, it made sense for Nita to kill because she saved herself and probably future unnaturals from a dark fate.

In Only Ashes Remain, not so much. Nita’s need for vengeance makes her such a flawed character, but relatable, nonetheless. Revenge is easy; forgiveness is not.

Not only that, but alongside Kovit, she is also learning more about herself, about her morals, her ethics, and slowly, she seeks to regain them, seeing the monster in herself come out.

There is so much thought that went into the novel and so much development. The story, the dynamics, there are such strong shifts between the characters that strengthen them. However, these shifts also create tension. Nita’s relationship with her mother changes and Nita becomes stronger for it, more independent, more self-assured. Her mother learns to respect her. As for her relationship with Kovit, so much happens between these two characters. They both grow and bring out the best and worst of each other, and yet their relationship maintains its healthy balance.

Schaeffer has given readers a thoughtful and tension driven read. It is compelling from the first sentence to the end, creating anti-heroes out of flawed characters. 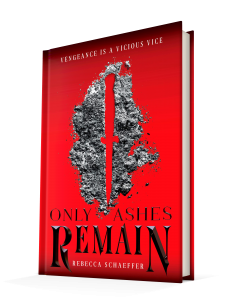