An incredible sequel, Kingdom of Ice and Bone, keeps up the energy of Beasts of the Frozen Sun.

Kingdom of Ice and Bone was such an excellent novel. Criswell has done such an excellent job of continuing her series. By expanding the magic nad history, Criswell submerged reader in the history and lore. In the previous novel, readers only learned the gods of her homeland. There were good gods and bad gods. But now Criswell has expanded on the lore, expanding upon who is bad and who is good. There is just so much more mythology in the novel making it even more engaging.

That is part of the charm of the novel, the rising tension surrounding the Fallen Ones and their vendetta against the eater of souls, Draki’s mother. However, their time in darkness has corrupted them, making them just as evil as Draki’s mother.

However, with the gifts of the Gods running through her blood, Lira has to come to terms with the gods’ wrath, with choosing the lesser of two evils in order to have her revenge and save her country.

It is such a compelling story, and the momentum continues to rise. Lira is on the edge of falling into darkness. She is on a downward spiral almost, her grief and anger drowning whom she was, changing her. It makes for a great show of characterization and character growth, and as Lira enters Draki’s home, new challenges face her daily.

Yes, Draki is a villain, but there is more to his character than that, something that makes him worth reading. He has the love of some of his people and the respect of others and as twisted as he is, he is a darker shade of gray. He may be evil, but there is such a sharp contrast to who he was in the previous novel that gives the reader pause

This gives him more depth; it allows him to be a multidimensional character instead of a generic villain.

This play on dynamics, this new development between Lira and Draki, makes the story so addicting.

Criswell executes her story amazingly. She pushes the reader at the edge of their seat with all the moment’s Lira and Reyker almost reunite only to be torn by fate yet again. Their relationship changes drastically in this novel, twisted by fate and tension, putting the reader on an emotional roller coaster.

Kingdom of Ice and Bone is the second novel in Criswell’s Frozen Sun Saga, and it is emotional, action-packed, and tension driven. Coupled with terrific characterization, this is one novel one will not be able to put down

Kingdom of Ice and Bone 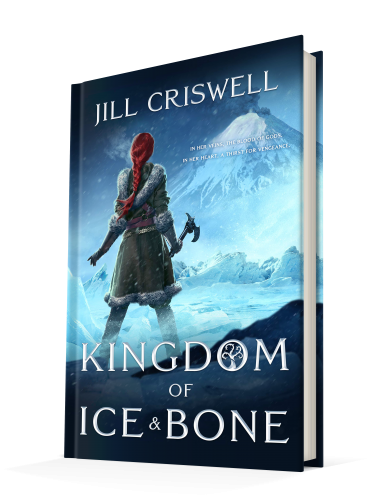