Not only is Unravel the Dusk an incredible sequel, but it is also a fantastic conclusion to an already fantastic series.

Spin the Dawn was a fantastic opening novel to the Blood of Stars duology and Unravel the Dusk was able to keep up the incredible momentum.

One of the best things about this novel was the character development. Maia was a good character in the first novel, but Lim builds off that, allowing her to grow exponentially. Maia is facing her darkness now whereas, in the previous novel, she was facing her mortality and discovering her inner strength.

However, after the events of Spin the Dawn, Maia is slowly turning into a demon. This now means she has to contend with this darker side of her, her anger and desire for revenge.

Nevertheless, the temptation is too hard for her, and she rationalizes, tapping into the power to save people. It says much about her character because she is willing to put her well-being to save those who do not deserve it.

However, it also says much about the complexities of other characters. Look at the Emperor. He is cruel and vindictive, but he genuinely cares about his kingdom. And Lady Sarnai as well, a resentful cruel princess who has more honor than anyone. Alongside Maia, they are multifaceted characters who are complex and so very human. They are all so relatable and engage the reader because they give tension to the plot and enhance the character dynamics.

As for the story itself, it is both tension-driven and character-driven. Lim continues Maia’s journey, but it takes another look at the power of the dresses. The utilization of the dresses reflect so much, the mind, body, and soul, and they bring more magic to the story.

By taking this focus on the dresses, Lim expands the magic of the novel and the tension. However, the energy the dresses and character dynamics insert into the novel makes the novel compelling. Nothing goes according to plan for Maia, and the new relationships she builds with other characters is enriching. The evolution of Maia’s relationship with Lady Sarnai was a pleasant surprise. Once again, by developing Lady Sarnai from more than a resentful princess, it opened the door to so many opportunities. It created so much tension between the characters and reflected the growth of the story as well.

All in all, this is such an engaging story. The journey that Maia embarks on is incredibly powerful. There is slightly less adventure in this story as it focuses more on the impending war, but the inner turmoil Maia faces engages the reader. It is a story about the battle between one’s inner darkness, relating it to the reader on an emotional and enlightening level.

Unravel the Dusk was such a brilliant conclusion to the series. It has such fresh folklore to it, and it just engages the reader on every level. 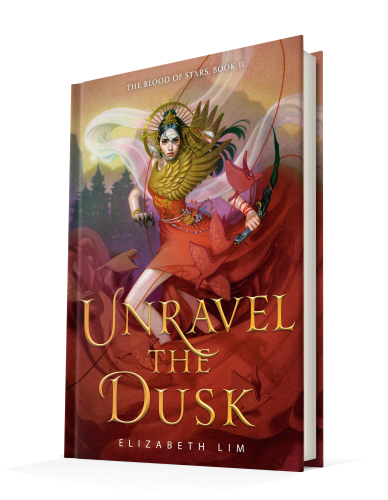