Set Fire to the Gods blends Avatar: The Last Airbender and Gladiator to create something new and unique. Used together, the authors were able to create a novel that expands upon both. The gods have separated the world into countries they govern, but there are more than the four basic elements. These authors have also created two more: flora and beast talkers. It is interesting to see these additional elements and the exploration of this rare soul element. Giving the story these added elements gives the story the edge it needs to be genuinely compelling.

Not only are there added elements to the story, but the Gods in the novel have also made themselves accessible to the people. They ultimately govern their countries, giving themselves castles in which to govern. They address their countries and people instead of just being an omniscient being.

The novel is reminiscent of Roman mythology, not only because of the gladiator edge but with the Gods themselves.

The gods came into power, protecting the humans from the Mother Goddess who grew jealous of the humans. The Gods had to team up together to destroy her. That history in the novel creates a mythology for the characters because it is the foundation of this world.

The Gods go to war, but instead of invading each other’s lands, they select their best fighters and host Gladiator fights, betting their land and resources. This aspect is thoughtful because showcasing how the Gods care about their people enough not to risk all their people. While honorable, the gladiator fights still put too much at risk, creating tension between the Gods and people.

The Gods, too create a class system between those who have a divine gift and those who are undivine. This just serves to create more tension in the story, giving the reader an idea of how the world operates for these characters. Like anyone with magic or power, they abuse it and the Gods care more for those with power than those without.

Set Fire to the Gods is a story with layers. There are layers to the Gods, and layers to the story that make it unpredictable. The layers are filled with tension and intrigue because there is more happening than meets the eye.

Now, while the worldbuilding is unique, and the fantasy compelling, the characters are what keep the reader hooked.

Ash and Madoc are the two central characters that break up the story. Ash is a Fire danger, and Madoc is an undivine posing as an Earth elemental with the help of his adoptive brother. Both are headstrong characters, but each has a softness that allows them to balance each other out. Ash’s mother was killed in a gladiator match, propelling her in the life of a gladiator, and the abduction of Madoc’s adoptive sister propels him into the ring for the money. These characters have different things drive them, but as their paths cross and mingle, they unravel more than they thought.

Alongside the development of the story, these characters grow and reflect the passage of the story. They balance each other out, both fighting for their loved them and their land, seeking to undo the damage done by the Gods.

Admittedly, they do not start as engaging, but when push comes to shove, they grow into characters worth reading. They pull the reader into the story; their fight and energy make them relatable and compelling. They grow and evolve into stronger characters. While their romance comes off as underdeveloped, their friendship is well-developed, giving their dynamic a prosperous footing. There is room for improvement in the romance area, but with the strong friendship that defines and pulls them together, there is no doubt that their romance will improve in the series.

Ultimately Set Fire to the Gods is an incredible novel. Fast-paced and character-driven, the layers to the story offer up a well-constructed, unpredictable story worth reading.

Set Fire to the Gods 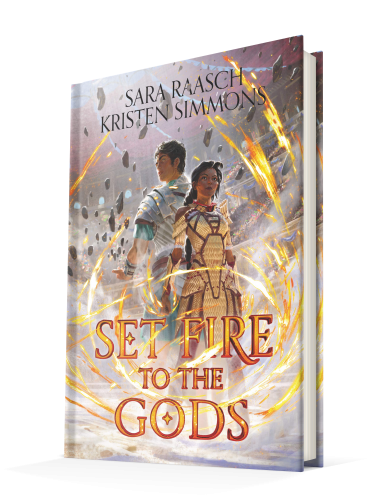