Diana Peterfreund does it again with In the Study with the Wrench, captivating readers with another CLUE Mystery novel.

What drives In the Study with the Wrench are the characters. Admittedly, In the Hall with the Knife is a little more charming because it is a more direct adaptation of the game itself. However, this novel does not lack for tension.

In the Study with the Wrench takes the secrets unveiled in the first novel to create more tension for the story and the characters. The novel opens with a new murder, creating a whole new mystery tied to their secrets, or rather one in particular. This time the reader has to figure out whose secret killed Rusty.

It certainly is a thrilling read and an overly enjoyable one. However, Peterfreund takes too long to circle back to that gripping opening.

While the story certainly is compelling, Peterfreund does a little too much recapping early in the novel. It is okay to recap the previous novel’s events, authors do it often, but it would have served the story better if Peterfreund had spaced it out throughout the novel, circling back to Rusty’s death quicker.

The story has that rising tension but slows down too much early on before regaining that momentum.

Nevertheless, Peterfreund was smart with her storytelling. She has taken the previous novel’s events and has expanded upon it, giving it a fresh outlook. Moreover, she uses different styles in her storytelling. Shifting between narrative and email correspondences, they do not distract the reader. They are as natural to the storytelling as ever. Peterfreund never loses the momentum once she has gained it and the switch in style pulls the reader further in rather than pushing them out.

As mentioned above, the characters drive the story forward. Their secrets and the previous novel’s events create most of the tension in the story. What is more, is the reader gets to see more of the characters and know them on a deeper level. These are incredibly relatable characters, all going through something intense.

Peterfreund has done an incredible job of giving the characters strong voices. Peterfreund gives them the depth this novel needs in order to be gripping.

After everything they endured, the fact that another murder has occurred sends the characters reeling, all in different ways. Most of the characters want to take the previous novel’s events and lock them away, forgetting them altogether. Moreover, they do not just want to lock away the events of the previous novel; they want to lock away all their secrets that came to light as well.

There is no single character who can let go of the past, not for lack of trying. Something continues to pull the characters back, whether it be small things happening around them, or more critical things like Rusty’s death. Their secrets are coming to haunt them more than in the previous novel because there is still a threat of discovery hanging over all of them.

However, it is more than the secrets that make them all noteworthy. These characters are relatable because they have many layers to them. Many of them are dealing with issues such as getting into the right college or their sexuality. They are dealing with peer pressure, how they look to others and learning to love themselves in the way they deserve.

The level of depth that Peterfreund has given to these characters makes them complex and human, and they jump off the pages. These are characters who stick to the readers, who resonate and connect to them.

Ultimately In the Study with the Wrench is a compelling novel. Addicting and matched with great characterization, the fresh story hooks the reader and reels them in.

In the Study with the Wrench 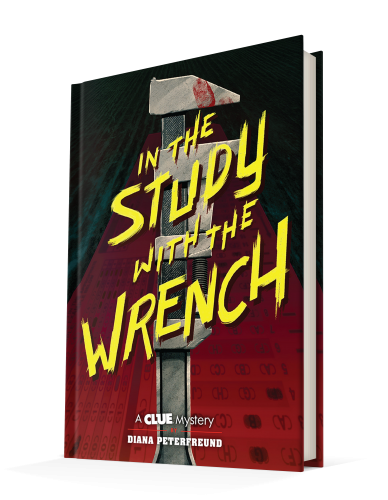