A fantasy reminiscent of a fairy tale, Among the Beasts & Briars is a thrilling, action-packed novel about the cost of power.

Among the Beasts & Briars is a fantastic concept. It follows Cerys, the daughter of the royal gardener. On the night of the royal coronation of her best-friend, creatures from the dark woods come and wreak havoc, sending her, an enchanted crown, and fox deep into the forest to find the lost city of Voryn, a place said to be magical.

It has the makings of a great story because of how it unfolds. There are many twists and turns within the plot that make it enchanting. Some bits are just verging on the predictable, but nothing is. Poston keeps the reader engaged with the evolution of the story and how she keeps the pacing up.

The momentum here is incredible. Following Cerys, Fox, and Vala (a great bear they encounter in the woods) through these treacherous woods is action-packed. They do not have a moment to decompress and try to figure out their situation. They have one goal in mind, and they have to survive. However, with Bone-Eaters and former friends hunting them, the dark magic of the woods keeps the energy of the novel from faltering.

Even when they reach Voryn, they discover everything they know is a lie. Poston tells us this right initially, but unfolding these lies, using that one line, in the beginning, to offset this adventure engages with the reader. It helps to anchor all the plot twists, weaving them into the story in a fantastic way.

Cerys is a great character. What makes her relatable is the fact that she is just a gardener with a hidden talent. Cerys has magic to make wildlife grow and change, connecting her to the woods. However, that is where she finds her power to break this 300-year-old curse. Moreover, her magic came by her accidentally.

Even by the end, there is no clear explanation as to why she has this magic, but it still fits within the story, as if the woods came alive and said, “okay, this girl will be our salvation.” However, again, it makes her compelling because she does not know how to harness this power; she only ever used it to make plants grow.

Cerys has compassion, she is strong-willed, but she has much self-doubt. It is that doubt that makes her more than just a character and someone worth following on this adventure.

Then there is Fox. Fox is exactly what one would imagine a fox turned human would be like. He is charming, makes horrible and funny puns, and grows throughout the novel. He is charming in his own devilish way, but not cliché.

It was great to see this story evolve from that opening tale of the crown to the adventure and magic. Among the Beasts & Briars is an incredible fantasy fairy tale that will keep you enchanted until the very end.

Among the Beasts & Briars 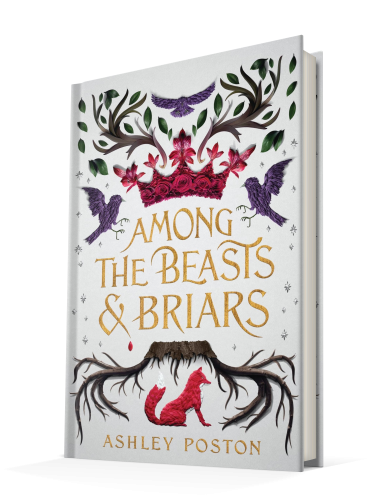