A Curse of Ash and Embers was not what I thought it would be. I had many high expectations for it and, unfortunately, it fell flat.

This most significant issue with this novel is the pacing and story development. These are two crucial aspects of a novel that drive a story and engage the reader, but the plot development stretches into many directions making it hard for the reader to lose themselves.

The story follows Elodie as she is sent off by her parents to work. There seems to be an enchantment on the letter, and her parents have no recollection of sending it but go along with it. So Elodie is sent off to Black Oak Cottage, home of the Blackbone Witches. There is a mystery surrounding this letter, even the Witch Aleida cannot solve, which creates one of the story arcs.

However, then there is another part of the story focused on the death and curse of Aleida’s mentor Gryssha, and another about an invading warlock.

The issue here is that there lacks cohesion. Events tie together these three stories, and yet they still feel disjointed. It feels like one story starts and ends quickly before moving on to the second part of the story. It lacks fluidity, creating a slow disjointed pace that is less than engaging for the reader.

As for the characters, Elodie is an okay character, but she lacks charisma. There is strength to her character, a resilience that never fails and a commitment to keep her mind open. However, this is not enough to make her shine on her own.

Elodie’s tone is bland, and she often comes off as a monotonous character. There is passion, but it dwindles like a flame in the wind. It does not resonate off the pages to connect to the reader.

The moments when Elodie shines are when she is interacting with Aleida. Those are the moments where the reader gets lost in the story because there is energy there. There is humor and drama and tension to make them fun to read. However, they are few and far between.

A Curse of Ash and Embers has promise, but it ultimately failed to be engaging with a disjointed plot and less than engaging characters.

A Curse of Ash and Embers 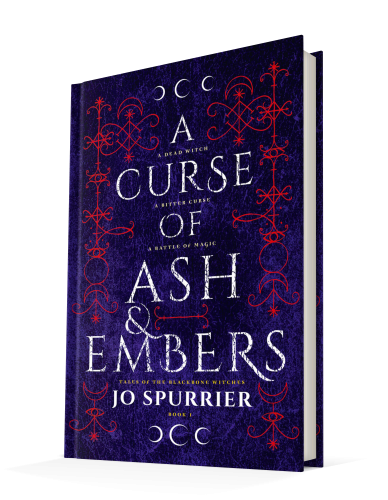