Daughter of the Serpentine is the second novel in the Dragoneer Academy, continuing Ileth’s journey as an apprentice dragoneer.

Much like with Novice Dragoneer, Daughter of the Serpentine is a character-driven story. This means that while not a fast-paced story, it is still made engaging by the characters.

The story continues to follow Ileth as she continues her dragoneer apprenticeship. It is a good story that focuses on the characters and their dynamics. Daughter of the Serpentine is not a fast-paced novel, but it is also not a slow-paced novel either. Much like with Novice Dragoneer, reading Daughter of the Serpentine is like taking a leisurely jog. There are moments where the pace quickens near the end of the novel, making those scenes some of the more engaging scenes. However,  what continues to give this novel substance is the characterization.

It is very engaging to see Ileth continue to shine throughout this story. Knight strives to make the characterization engaging, and he succeeds because of how Ileth shines and grows. Ileth still has a stutter, which can sometimes be debilitating for her, but what is remarkable is how she continues to prove herself to her comrades how clever and resilient she is. So this makes the story incredibly engaging as far as the narrative goes. Knight showcases the respect she has earned, how the opinions of others change around her. What is more, is how Knight highlights the equality she gains from the Dragons.

The fact that the Dragons give Ileth’s more consideration than they do other humans shows that they respect her more than they do other humans. It creates a strong connection between Ileth and the Dragons, foreshadowing how highly she will rise through the ranks of the series. Ileth honors these Dragons; she treats them as equals and with reverence. This also highlights how different she is from her comrades. Most of her fellow apprentices joined for a title and nothing more, and the Dragons know that. For Ileth, it was her love of Dragons, her admiration of them and Dragoneer’s that drove her forward. It gives Ileth more depth and connects her to the reader, seeing how loyal, kind, intelligent, and thoughtful she is.

As well as the storytelling goes, it is very intricate. Daughter of the Serpentine is a coming-of-age story that focuses on the coming of age aspect of Ileth’s journey as a dragoneer. However, once again, it is rather long. There is nothing wrong with a story being almost 500 pages; the only issue here is that the chapters run long. Given the politics going into the novel, the long chapters do not give the reader a moment to breathe and absorb the information given to them.

The story’s pacing is not an issue, but it would have benefited the story much more if the author had decided to break up these chapters to give the reader a moment to breathe in and absorb all the information. Because there is much information going on in the story, there are many intricacies regarding politics and social upheaval. Knight is still building up the world for the reader, which is not a bad thing but with a character-driven story that is not fast-paced, it does run the risk of becoming tedious just because the reader isn’t having a moment to breathe.

Daughter of the Serpentine is not a fast-paced story, but it is still very engaging. It has a strong voice and enough strong characterization to keep the reader engaged. Just be warned that this is not some action-packed story with Dragons and battles. There is a battle near the end of the story, but the story focuses on growing Ileth, growing into her role, and proving to everyone that she can be a strong dragon apprentice.

Daughter of the Serpentine 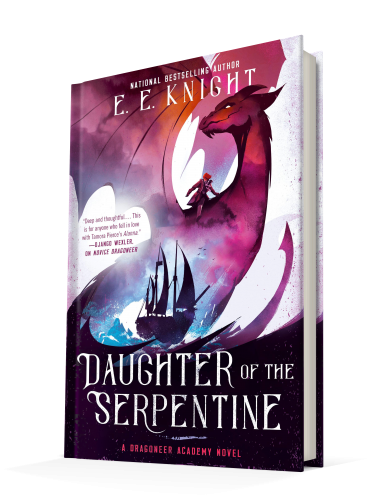