Auxiliary: London 2039 is reminiscent of Altered Carbon and Robopocalypse. It has much potential for storytelling, but it lacks a compelling protagonist.

Auxiliary: London 2039 follows Dremmler as he investigates the murder of a girl. The exciting part is her boyfriend, her murderer claims his augmented robotic arm killed her by itself. On his investigation, he discovers a conspiracy with a connection to his past.

The story moves at a good pace, but there are some issues with pacing. It develops the story well enough but leaves out key details that leave the reader confused. It is jarring, and it does not flow cohesively. There is a chapter from the point of view from the opening chapter death Dremmler is investigating, making the reader question the story’s validity.

The overall story is interesting, and the ending mostly was action-packed and filled with some great twists, but it was the journey there and that one chapter that was not paced well.

Another issue with the story is Dremmler. Something is disconcerting about his sexual attraction to women. Even at the murder scene, he recounts all her attractive features, making the reader uncomfortable. It is clear Ritcher was trying to create a flawed hero here, but it worked against the story.

Unfortunately, Dremmler is a sexist, misogynistic prick, and it is hard to connect to him.

Sure, in the end, he was able to redeem himself, especially after the numerous twists and turns, but I was more confused as to the turn of events rather than distressed by the ending.

Auxiliary: London 2039 is an exciting novel at the end of the day. Is it a novel I would read again? No, once was enough, but the premise is enough to keep the reader engaged. 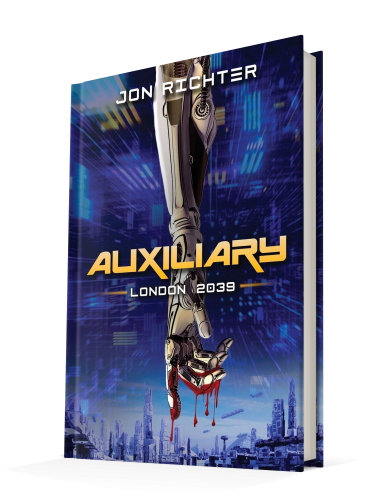