The Left-Handed Booksellers of London has a lot going for it. Unfortunately, it just failed to keep this reader’s attention.

The most significant things that did not work for me was the dialogue. The most distracting thing any author can do is use ellipses far too often. That is what happens here.

The dialogue is distracting and slows the pacing down drastically. It would be different if it happened here or there, given the circumstances of the plot, but it happens almost all the time when the characters are talking. After a time, it becomes distracting and tiresome.

Perhaps it just is a pet peeve of mine, but after a time, it made me lose track of what these characters were even discussing. This made it hard to connect to the characters and their dynamics in the long run.

There is no disputing Nix’s imagination here. It was a good story, and the overall storytelling was engaging. The Left-Handed Booksellers of London follows Susan as she embarks on a journey to find her father only to get swept up in the fantasy that hides underneath London.

The Left-Handed Booksellers of London has the old-world feel and delves into the fantasy that is kept in check by booksellers. It has a strong foundation to it and builds up at a proper momentum; if only the dialogue did not slow down the pacing of the story so drastically, I would have loved this novel.

Nevertheless, it is an imaginative story that gives the reader something worthwhile. It has the fantasy to keep the reader intrigued.

However, the characterization faltered a bit. I wish I could say I loved the characters, but I did not. They have great style, Susan dressing like a punk rocker with her Doc Marten’s and Merlin with his gender-fluid attire seem like they would be incredibly interesting. However, it was, once again, their dialogue and dynamics that drove me to boredom.

When Merlin was not stuttering and stammering about, he was impressive, especially when it came to his flamboyant attire. However, Nix could have done much more with this gender-fluid character. Given the name Merlin, I expected more.

Merlin is the only memorable character. However, Nix does give Susan the right amount of growth, but she still is not as memorable outside of her Doc Martens.

I honestly thought I would love The Left-Handed Bookseller of London, but it ultimately fell flat with the overuse of ellipses and overall lackluster characters.

The Left-Handed Booksellers of London 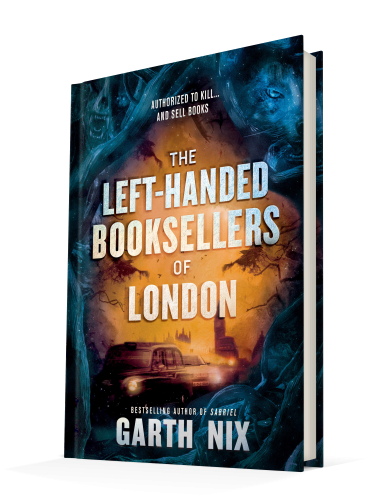