A brilliant story, All These Monsters tackles abuse and what it means to be a monster among monsters.

This story follows Clara, who joins an international-fighting squad to escape her abusive father. That says so much right there about the story and the plot. The fact that this 17-year-old girl is willing to risk death fighting deadly monsters says much about her family life. And it says a lot about abusive households. Another character steals and lives on the street because he was in an abusive home, abused by his mom. He joined for the same reasons as her.

All These Monsters takes a look at abuse and evaluates it for the reader. It highlights what abuse is and emphasizes that it is not okay.

However, what the story also does is take a look at what it means to enable abuse. Standing by, making excuses like Clara’s mother, makes them abusers as well. Clara’s father is always sorry, but it keeps happening.

As for Clara, what happens later is even more shocking. She enters into an abusive relationship. At first, Clara does not recognize it, and she makes excuses, much like her mother. She has fallen into the trap many people do when they enter abusive relationships — they fail to acknowledge it because it is normal behavior for victims.

However, it is a powerful moment in the storytelling when Clara recognizes that she deserves better. She is in an abusive relationship and stands up for herself and her friends.

What is a Monster?

Tintera also evaluates what makes a monster. They are hunting Scrabs in the story, monsters that attack without provocation, scaly creatures that are as deadly as they look.

All These Monsters brings up what makes a monster by bringing in human evils, like kidnapping, endangering life, and greed. There are plenty of monsters in the novel, but the only real monsters are the humans, not the beasts they hunt.

Tintera uses their language cleverly and constructively. They ask big questions and put them into a story in a thoughtful way to give depth to the story. It has a compelling story, challenging abuse, and giving readers a look at the many ways an abusive relationship can unfold. It also offers readers a source of hope by providing the victim their awareness and strength to walk away and fight back. All These Monsters is an excellent start to a new duology. 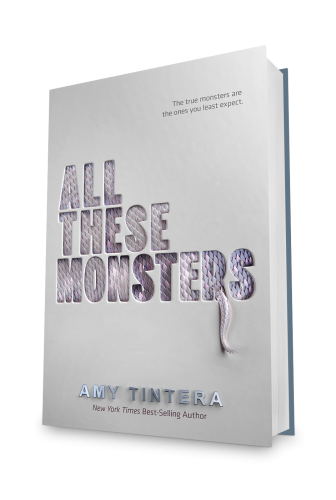 0 thoughts on “Review of ‘All These Monsters’”