God Storm continues where Shadow Frost left off, following the characters as they deal with magic, dark and powerful.

I am going to be honest; I got lost reading this novel. However, that is not because the novel itself is terrible. I honestly think part of the reason I could not enjoy this novel as much as I had hoped was that I had forgotten most of what had happened in Shadow Frost.

That does not mean Ma is a poor writer, but I think she relied too much on the reader’s ability to remember that she made minimal references to what happened in the first novel. Unfortunately, this is not enough to reestablish the world-building and the dynamics.

There are just too many characters pulling the story in various directions that some world-building would have benefitted the story’s foundation. God Storm seems as though it is barely connected to the previous novel, which is part of why some readers may feel lost. The villain is gone, and now something else entirely different is going on.

While the story is interesting, it feels like a far departure from the previous novel.

However, this goes in line with the storytelling. It is a fast-paced story, and Asterin is going places, but it is initially unclear where she is going and why. Transition-wise, the reader may have trouble understanding Asterin’s journey as she seeks to solve the mystery behind shadow magic.

Then there is Luna. It is clear Luna has abandonment issues, and her anger towards Asterin is understandable. Asterin’s fake mother forced her to chose between Luna or the man she loves. Asterin’s choice not to save Luna made her angry, understandably. She feels betrayed, but her anger is blinding her and makes her feel weak. Now she takes out all her anger on Asterin, giving away her freedom to Eoin, God of Shadows. Luna’s journey to be a villain makes her development interesting but her constant whining makes her unlikable.

Asterin’s mothers’ point of view also did not add much to the plot of the story. Asterin’s mother was just sort of there, and even by the end, she felt more like a plot device than a character worth caring about.

While the LGBTQ+ representation between Orion and Harry was as enjoyable as it was in the previous novel, the rest of God Storm fell flat. Like I said at the beginning of this review, I would probably have liked it more had I re-read Shadow Frost more because God Storm left me feeling lost from beginning to end. 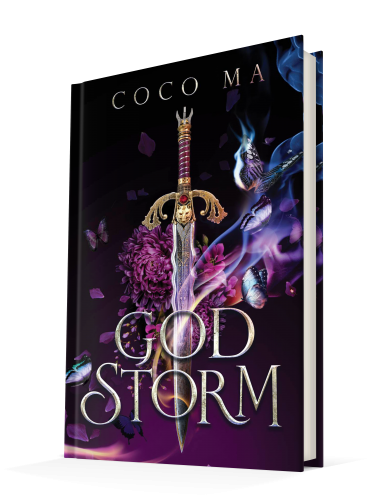