Bitterblue is the third novel in the Graceling series that follows Bitterblue, daughter of the late and cruel King Leck, as she seeks to heal the kingdom by seeking out the truth of her father’s misdeeds.

One of the things that set Cashore apart from other authors is how she makes all her female characters very distinct from one another. Some authors tend to make their female characters very similar from their tone to their personalities and strengths. For this series, each novel has a strong leading female, but they do not sound the same, nor do they act the same. Their strengths are also very different from one another. For Katsa is was her strength and unyielding attitude. For Fire is was her compassion and resourcefulness, and for Bitterblue, it is her intelligence.

Cashore devotes her time to making her characters different because it is a different story and the characters grew up differently, inherently making them different. As readers, we see how different Bitterblue is

Bitterblue is also a slower-paced novel. Bitterblue is a more character-driven novel, so the reader learns more and more about Bitterblue and sees the realm through her eyes. As a character, she is thoughtful, compassionate, observant, and intelligent. She sees things others do not.

This is a novel about unraveling the past, most of which is a blur considering her fathers’ ability to manipulate minds and memories, in a way. The reader appreciates her character’s intelligence while she unravels the mystery of what her father did to her country.

This puts Bitterblue in a difficult position because she wants to right those wrongs; she wants the truth to come out because she believes that her kingdom can finally heal once it does. Unfortunately for her, her father mentally abused people and used them to do his evil for him, so they are as scarred as other victims. These men are victims and do not want the truth to come out.

For Bitterblue to have to deal with this knowledge, it highlights her resilience and compassion, strength of mind, and character, making her compelling.

A Story of Healing

As just mentioned, the story is about Bitterblue unraveling the past. It makes a compelling case for the reader to evaluate what is justice and what is not. Are white lies okay? This is a story that makes the reader think.

Bitterblue reveals that King Leck was despicable. He was cruel and sadistic and used his people to commit his misdeeds. He still got his hands dirty, but he also took joy in watching others inflict the pain on others. Trigger warning there is mention of rape in the novel, and although there are no explicit details mentioned, it will still make the reader uncomfortable, as it should.

This is a story of healing as much as it is about unraveling a mystery. With his power, he mentally raped people; he forced them to commit horrific acts, things they still remember. These are the people who do not want the truth open because they have been scarred, they have these memories of their crimes, and even though they were unwilling, it horrifies them.

For them, they feel as if all hope is gone.

However, Bitterblue highlights how the truth, how talking can help those find closure, find peace and allow them to move on. Some wounds may never heal, but that does not mean hope is gone, and that is the lesson there. Even when all seems lost, there is hope.

Overall, Bitterblue is a compelling novel. Not as action-packed as its predecessors, but the nature of the story, the thoughtfulness, and compassionate writing, make it a mature and intelligent continuation of the series. 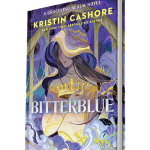