The Bane Chronicles follows the ever-charismatic Magnus Bane through the centuries with carefully written short stories highlighting his relationship with Downworlders and Shadowhunters.

It was such a fun read. The Bane Chronicles is a collection of eleven short stories that illuminate the life of the marvelous Magnus Bane. The stories were written not only by Cassandra Clare but also by Maureen Johnson and Sarah Rees Brennan, going through the centuries to add humor and history to the Shadowhunter World.

The Bane Chronicles is an excellent addition to the series because it adds history. Magnus Bane is a warlock which means that he is immortal, so he has been alive for quite some time. These stories capture who he is and take readers back as early as the 18th century to highlight some important moments in his life and the world.

The stories have humor, highlighting the lighter side of his personality, the fun side. However, some of the stories also focus on the depth of his psyche, how much he cares and loves. These stories bring to life his lifelong relationship with notable characters in the Shadowhunter world, such as the Herondales, the Lightwoods, Catarina, Camille, Raphael, and Ragnor Fell.

The Bane Chronicles adds so much history to the world that Clare has created in a very cohesive and thoughtful manner. Moreover, none of the authors missed the mark on bringing this brilliant fan-favorite character to life.

The collection also has eleven illustrations highlighting one scene of the following story. They are so well done, giving the stories more life.

It is unnecessary to read The Bane Chronicles to understand The Mortal Instruments, The Dark Artifices, or The Infernal Devices. However, reading these eleven short stories gives the universe Clare created and gives the reader and fans a stronger appreciation of the world. 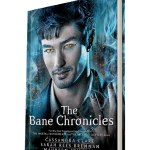