The First Sister follows three captivating characters as they struggle to find their rebellious side in this compelling space opera.

The First Sister gives readers something different, making it memorable from the beginning. It follows First Sister, a girl who has no name and no voice as a priestess of the Sisterhood, a religion that governs the space. With no voice, she has no control over her body, required to offer it to men on the ship to “remove their distractions.” From the beginning, the reader feels for this character because she only sought freedom only to be abandoned and left behind.

It is reminiscent of The Handmaid’s Tale, bringing to life the argument of a woman’s body and who has control over it. Over time, readers see First Sister regain control over her body as she begins to fall in love with the new captain, Saito Ren, who allows her freedom without the cost of her body.

The story also shifts to Lito, a soldier of Venus, defeated in combat by Saito Ren and now ordered to hunt down and kill his former partner Hiro.

The First Sister shifts between two live perspectives and recordings left by Hiro, giving the story a strong foundation. The politics require careful reading because it can get a little confusing when trying to remember who is fighting who. However, the context and pacing allow the reader to submerge themselves in the growing dissent of the characters, their unhappiness, and the urge they need to change the government.

Again, the characterization is fantastic. The First Sister delves into the psyche and narrative of the characters, especially First Sister, because she cannot talk. Her vocal cords were cut at a young age, so everything the reader learns from her is through her emotions. Lewis did an incredible job of bringing her to life through her emotions, thoughts, needs, pain, and grief.

The same goes for Lito and Hiro, which is interesting because the reader is only getting to know Hiro through their recordings. However, these recordings capture who they are, their identity, and why they have rebelled against a government that gives them everything.

Lewis has done a fantastic job bringing The First Sister to life. They give readers a thoughtful and compelling read that may feel slow but never lacks tension or characterization. 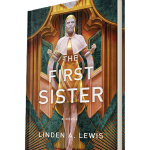