Ravage the Dark brings readers back to Moray in the conclusion of the YA fantasy duology that retold the story of The Count of Monte Cristo with gender-bent characterization.

Ravage the Dark picks up right where Scavenge the Stars left off. Our crew of misfits has left Moray to get Cayo’s sister treatment for the ash fever. After the revelation that the counterfeit coins cause ash fever; coins Amaya spread through the country and coins his father helped create.

However, their goal is also to find Boone and discover who started the trade of the counterfeit coins.

It is an excellent way not only to continue the retelling but also to make it unique. Sim started this duology as a unique retelling and has used the momentum to weave a compelling narrative. Sim is focusing on developing the plot, on creating a mystery that needs solving.

It is great to see the story take off the way it does. The plot’s natural fluidity makes all the twists and turns fit within the story. Sim also manages to maintain the story’s unpredictability. While the story takes some unexpected turns, it does not distract the reader. Everything makes sense. Again, it feels like an organic evolution to the plot that started as simply a quest for revenge and has become one of these characters trying to solve a crime and repair themselves.

Ravage the Dark’s evolution also allows the characters to grow and the dynamics to strengthen.

Shifting between Amaya and Cayo, the story evolves their personalities and narrative. Both characters still care deeply for one another, but the distrust between them and Amaya’s lies linger. It does create a good amount of tension between their characterization and highlights some deep-seated feelings they have for themselves.

For Amaya, she struggles to let go of her need for revenge. With Boone, with Mercado, with everyone. Sold to a debtor ship as a child, she was abused, her name taken from her. This has led to the build-up of anger within her that keeps her from moving on.

When she met Cayo, things began to change. Amaya wants to do good, to right the wrongs and evils of the rich over the poor. She wants to let go of her anger, and it is a struggle for her. Nevertheless, her struggle makes her relatable; it makes her resilient and teaches her to grow beyond it.

The same goes for Cayo. Cayo has been lost for a long time. Ever since the death of this mother, he has been floundering, losing himself to gambling and drinking. However, with the realization that his father was corrupt, with his sister needing him and justice, Cayo learns much about himself. Cayo learns restraint, learns to care for himself, and ultimately learns to find peace within himself and love himself.

Filled with fantastic characterization and a clever plot, Ravage the Dark engages the reader from beginning to end, maintaining its pace, tension, and unpredictability. 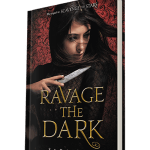