The Lucky List is a powerful story of grief, love, and accepting oneself above all else.

One of the major themes that stood out about The Lucky List is how characters deal with grief. Emily’s mother died of cancer three years ago, and she is still reeling. Her mother wholeheartedly believed in good luck, and when she passed, for Emily, it felt like all the luck was gone in the world. She isolated herself from her friends, and her father must sell the house to pay off the medical bills. For Emily, her grief is stopping her from living, from moving on, from connecting to herself.

Emily’s journey is all about overcoming her grief. In the small town she lives in, everything seems to remind her of her mother, her best friend, and she is struggling so hard not to lose that connection with her mother. However, it is coming at a cost to her. Emily’s relationship with her father and her friends becomes strained, and there is this part of herself she is keeping locked up because she was unable to share it with her mother.

For Emily, The Lucky List is also about facing her fears and being true to herself. Ever since the death of her mother, she catalogs everything by the risk of death and injury. Her grief has stopped her from living. However, Blake, the daughter of her parents’ oldest friend, who has just moved back to town, offers her a helping hand. There is no judgment from her, no pity in her eyes, just understanding and acceptance. She does not push Emily; she nudges her, helps her, and ultimately guides her not only out of her grief but also out of her fear.

The Lucky List is also a coming-out story. Emily had a boyfriend, but when he wanted to take the next step in their relationship Emily freaked out and acted out, causing a rift between her and her friends.

What was holding her back was her inability to accept her sexuality, not because she is ashamed, but because she could not share this news with her mother. Her mother nudged her in her friend’s direction, thinking it was what Emily would need after passing away.

Emily believes so strongly that to hold onto this connection with her mother, she must live a lie even if it makes her unhappy. All because she was unable to share this part of herself with her mother. It is sad but moving when she comes to terms with the idea that her mother just wanted her happiness and nothing more.

By realizing this, she accepts herself and can live her truth with all the support of those around her.

The Lucky List is a remarkable and moving novel. The Lucky List is not just a coming-out story, but it also deals with grief and how moving on does not mean letting go; it means living in the place of those who have passed away. 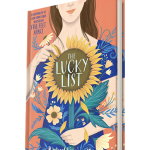