The Bright & the Pale explores Russian folklore in this young adult fantasy that lures its characters into a mountain and pits gods against one another.

While reading The Bright & the Pale, I felt like I was watching a movie. The pacing, the tension, they lured me in. However, what hooked me was the chilling atmosphere of following these characters deep into an abandoned mountain. It was something out of a horror movie, but without the blood and gore.

As the characters descend deeper and deeper into the heart of the mountain, their fears come alive, making the novel both menacing and captivating. In ways, it was reminiscent of The Descent, especially when they come face to face with these creatures that live in the dark.

The atmosphere is fantastic, coupled with the rising tension and the mythology of the gods; it stands out.

Furthermore, it is that dynamic and mythology surrounding the brother gods that keep the story interesting. It is the driving force between the characters to venture into this frozen wasteland that left Val as the only living survivor and come face to face with dark magic. Moreover, with the story unraveling piece by piece, the mystery of the gods, The Bright God and the Pale one, and this idea that one is good while the other is evil. However, who defines good and evil? The victors write history, and the Bright Gods emissary is not exactly a good guy, making the reader think, which is appreciated.

Admittedly, the reader is less drawn to the characters. This band of misfits is a good group, the tracker, the thief, the exiled soldier, the girl from another land; they make a good team. However, while there is some tension between them, their personalities do not shine despite their chemistry.

For me, I was not reading the story for the characters. I was reading it for the story, for the mythology, and the eerie thriller setting. This is unfortunate because I think there were plenty of opportunities to give the characters a chance to shine, for their personalities to grow.

There is a lack of growth surrounding them, especially with Val. For 75% of the novel, she remains the same girl. It is not until the very ending that something changes and shifts in her. However, it is not character development; it is an effect of magic.

I wanted more from the characters, more vibrancy, more development, and growth so that I could be more invested in their characterization.

Overall, The Bright & the Pale has a solid foundation. The mythology is there, the atmosphere is there, and the rising tension keeps the reader engaged. It only lacked character development.

The Bright & the Pale 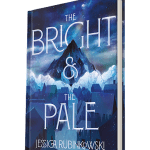