Mexican Gothic is a chilling tale that keeps the reader on edge from beginning to end.

Mexican Gothic is an excellent novel. What was striking about the opening was how Moreno-Garcia decides to introduce the reader to Noemí. The scene is striking, painting a decadent time in 1950s Mexico and introduces Noemí through a male lens.

This first impression paints a frivolous view of our main protagonist, but it works in favor of the plot because it showcases how the characters constantly underestimate her. Even the reader underestimates her. Noemí is an accomplished character, a studious one who wants to do something great, not just party, drink, and find a husband. Noemí wants to make a name for herself, which makes her incredible, her determination and resilience, her genius.

As a Mexican woman myself, I love and appreciate what Moreno-Garcia does with her female characters, breaking a mold and forging a solid direction outside of gender and racial stereotypes.

Moreno-Garcia did an excellent job of building up the tension and chilling atmosphere as well. Mexican Gothic was reminiscent of Crimson Peak and the original American Gothic. However, there is something wrong, something unsettling about this house that Noemí goes to. After receiving an unsettling message from her cousin.

The atmosphere is chilling, creepy and makes the reader wonder what is real and what is not. Following Noemí through the dark halls, as she learns more and more of the dark history of High Place, the reader becomes increasingly unsettled.

The creepiness, visions, and gloom draw the reader into the narrative and mystery surrounding the house and its inhabitants.

Mexican Gothic is incredible. The pacing, the tension, the atmosphere, and the characterization draw the reader into the narrative. Furthermore, the ending was unpredictable and unique, offering readers something new and creepy. 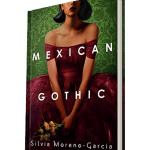