What Big Teeth delves into werewolf mythology as it stands apart from traditional fiction, creating a story of a girl struggling to find her place in her home.

What Big Teeth is a fascinating debut novel, but the first half of the story takes some getting used to. Personally, after such a strong opening, I found the story’s pacing to be lackluster. It was not bad, but it was a struggle because it felt like much showing instead of telling.

Now, I say felt because as I was reading, I was seeing the story play out. There is much exposition to the storytelling, but it goes with the narrative that Szabo was building. What Big Teeth is a story about a girl sent away by her grandmother at a young age seeking refuge back home. However, unfortunately, Eleanor does not feel like she fits in anymore, which is relatable to the reader.

However, there is something sinister and captivating about the story. It did give off Addam’s family vibe, it was dark, mysterious, and cooky, and that is what drew me in ultimately. Intrigue is what kept me reading, especially once What Big Teeth introduces Grand’Mere. My need to unravel the mystery behind Eleanor hooked me.

Now, while the story did give off Addam’s family vibes, it did lack the charm. I was reading the story for the story and not the characters. The problem is that the whole family dynamic lacked heart and Eleanor herself lacked substance, which is ironic.

Honestly, I just was not a fan. Everyone was cruel to one another, and I was not too fond of Eleanor’s grandmother, who did not welcome her home at all. Her sister and Rhys were vicious bullies, constantly doubting Eleanor and undermining her. To be blunt, they were awful to her. Eleanor is flawed, she makes mistakes that put the family in danger, but it is easy to understand why. The only person kind to her is Grand’Mere; she is the only one who shows her love and kindness, whereas everyone else dismisses her.

What Big Teeth was a struggle for me. It is unique, but the characterization fell short, and ultimately, I did not care for them; I only cared for the evolution of the story. 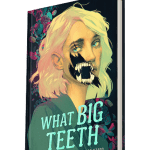