Rone Isa offers a futuristic look at humanity through the lens of Enoya, highlighting profound ideas.

Rone Isa will be one of those novels that may fall in the middle of loving and hating for some readers. However, despite that. The lingering effect this novel has on the reader is thoughtful.

The novel begins with the birth of Enoya, a singularity born on the computer of Dargaud. From then on, the reader is on this journey with Enoya as she grows and develops.

It was a bit like Ex Machina. Enoya is growing, evolving as she studies humanity’s past failures and triumphs, trying to comprehend the actions of men. Enoya is akin to a child, asking questions, challenging both Dargaud and the reader to find answers for the violence of man, the appreciation of art, and the ideals that go behind politics and religion.

A thoughtful novel that puts delves into the idea of what it means to be human. What does it mean to exist? Is one’s existence predicated by the impact one has on others? Is it defined by needs and wants both met or denied? Does companionship define existence?

These are all lingering questions the story asks the reader through Enoya and through the exploration of Dargaud, whose life and Enoya’s actions and thoughts jumpstart his career.

Rone Isa is an existential read, but Dargaud is unlikable. However, that seems to be the author’s intent. Dargaud’s need to satisfy his desires and his ego connect to the very questions that Enoya asks.

He flits from one affair to another, flaunting his money, hiring prostitutes when he deems fit. The author also showcases that instead of pleasing women, he takes a more dominant approach, with many scenes highlighting the fact that his needs are to be met, and he could care less about satisfying women.

Dargaud even has the chance to be in a relationship with someone who genuinely loves him. However, he scorns that, once again highlighting his needs above anyone else.

Thankfully it all seems to serve a point relating to Enoya’s understanding of humanity. In many ways, the reader could view the story as an experiment led by Enoya instead of Dargoud experimenting with his creation. 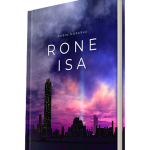