The Second Rebel picks up after The First Sister, continuing to be relatable, relevant, and impactful every step of the way.

One of the best things Lewis does with their writing is focus on the characters. If you read The First Sister, you already know that these characters have gone on an extensive journey, leading the reader into unpredictable territory.

That continues here. The fact that Astrid, who was only known as First Sister in the previous novel, has a self-given name speaks volumes. In the first novel, she had no name, no identity to call her own, no ownership whatsoever over her body or self. Astrid has reclaimed her identity by giving herself a name, and she has regained ownership over her sense of self.

Throughout the novel, Astrid’s evolution gives the reader such a thrill because she is rising; she gains strength in every act she does. In addition, Astrid is growing into a formidable character that makes her stand out within the story.

However, Astrid is not the only other character here that goes on this journey. Now we have Hiro. Readers got to know Hiro through his voice recordings in the previous novel. However, Hiro is now an active participant in the narrative.

In the previous novel, their identity and was taken from them at a microscopic level. As they continue to fight for the rights and equality of Asters, they must also rediscover who they were. Hiro’s journey is like Astrid’s because they both lost ownership of themselves and are fighting to regain it. However, Astrid is fighting as a woman for women’s rights. In contrast, Hiro is a non-binary character, fighting for the rights of others like themselves, for others who are thought of as lesser than and taken advantage of.

To see these two characters drive the novel forward is incredible because their journey is impactful and relatable.

The Second Rebel also has a formidable story. As a space opera, it goes between four central characters, giving the reader a good idea of how all their ideals fit together.

At its core, this is a novel about equality and identity. These characters are fighting for the equality of others to end the poor treatment of Asters. It is about regaining identity, about gaining control over oneself without having to make sacrifices.

Lewis addresses women’s rights; they address immigrants’ rights and the rights of the LGBTQ+ community. Their messages are carried throughout the story by the plot’s well-thought-out development and strong characterization and growth.

It is incredible to read a story so impactful because of how relevant it is and how thoughtful the story’s message is. 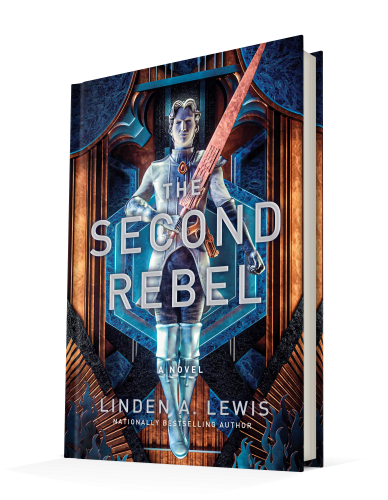 Buy on B&N
Buy on Bokshop