A Forgery of Roses blends fantasy, the gothic, and mystery to weave together an engaging novel.

A Forgery of Roses follows young Myra, a young girl who is now the sole caretaker of her ailing sister after her parents’ disappearance. Myra, like her mother, has a gift many would kill for: the skill to alter reality with a stroke of her paintbrush. However, this is a gift she rarely uses as many believe the artist’s power should belong to the Artist himself. So, Myra keeps it secret and safe. Until the Governor’s wife comes along and blackmails her into using her magic to bring back her dead son. Once at the mansion, Myra can’t help but explore the old building and the abandoned 5th floor.

Olson is very good at building up the tension and atmosphere of the novel. From the beginning, this world she had here is like so many classics. The foggy, dark, and dim nights with fear and danger around every corner capture the readers’ attention. It worked. The mansion belonging to the Governor with the abandoned third floor was spectacular. Again, the creepy portraits of mutilated humans abused by the magic of one of their atmospheres are stunning. Together, these elements worked to capture the reader’s attention.

However, while the tension was well-developed, the pacing lagged. It felt like Olson was stretching the story out to be longer than it needed to be. There was a lot that happened in the mansion that seemed superfluous. Unfortunately, not much happened, and when it came to Myra’s investigation of the son of the Governor, the tension was lagging. I wanted to see her use her magic more and investigate the 5th floor. There are more skeletons in the closet that were touched upon but not flushed out, which kept the pacing from picking up.

While I enjoyed the story’s characterization, there were its and pieces that left me wanting more. Myra is okay, but it almost seemed like she were two different people. Yes, people have different sides, but this goes deeper than how she presents herself. It goes to her internal narrative. At times she is sweet, kind, and patient. But then she flips and becomes this selfish, naïve girl who is insensitive to others as if her needs and desires are the only ones that matter. Yes, her life is hard. Her sister is sick and desperately needs medical attention they cannot afford, but her tone is more abrasive than I think the author intended.

Regarding her sister, it is clear she loves her, but to refer to her as a “walking corpse” seemed cold. Again, this is where it seemed like there were two different people. The word choice did not match with how Olson was building the character. Is it realistic? Yes, I believe so, but I don’t think the author was trying to be that brutal in making her characters come alive.

As someone with anxiety, I was not a fan of how Olson depicted the Governor’s older son. Through Myra’s lens, it was as though she perceived him as weak without understanding what it was like for him. The fact that he tries to break out of his comfort zone for the family is evidence of his strength, which I did like. However, as the story is from Myra’s perspective, it is as though she wanted him to shed his skin and be what she needed him to be rather than accept him.

Then there was also the love triangle. Myra is also attracted to another character who reads as though he is in his forties. His tone was just too mature that I quickly forgot that he was supposed to be closer in age to her rather than an older gentleman, making it an apparent disconnect for me.

Overall, it may not seem like it, but I did enjoy A Forgery of Roses. It had a lot of ups and downs and seemed more convoluted than it needed to be, and it may not have captured my heart the way Sing Me Forgotten did, but it was okay.

A Forgery of Roses 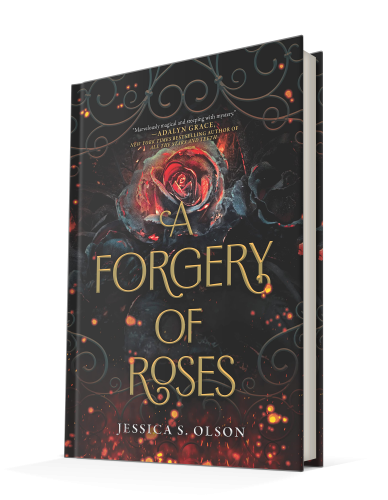