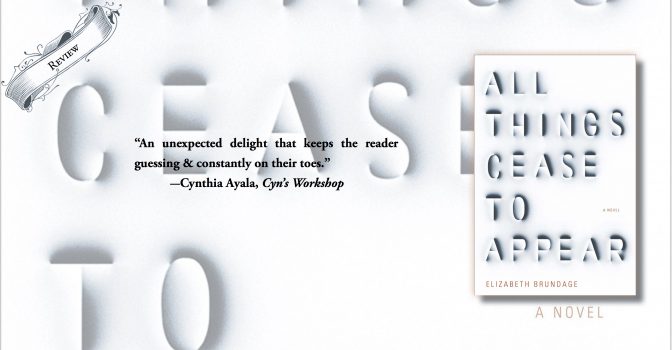 George Clare is an art teacher, but is he a murderer? After coming home one late winter evening to find his wife dead and his three-year-old daughter alone in the house, George is the immediate suspect, but did do it? A whodunit that evolves and studies the characters and their marriage through multiple narratives and their own to show everything that led up to her death.

Published on March 8, 2016, by Knopf comes the mesmerizing thriller All Things Cease to Appear by Elizabeth Brundage about a marriage that dissolves into death.
END_OF_DOCUMENT_TOKEN_TO_BE_REPLACED

What exactly the perfect proposal? Every proposal is subjective, relating to the couple and how well they know one another. Do I have a story? No, I have something better, at least to me. END_OF_DOCUMENT_TOKEN_TO_BE_REPLACED

By: jnkm Haha and Byul‘s wedding invitations have been revealed! Haha and Byul’s friend Lee Kyun tweeted on November 29, “Haha hyung and Byul are finally getting married tomorrow. It will be a private wedding. You can’t enter without your invitation. All those who are invited, all those who are going to celebrate – call me and let’s go together. I give all my blessings … END_OF_DOCUMENT_TOKEN_TO_BE_REPLACED

By: Eddie Makuch One of the new features in Final Fantasy XIV: A Realm Reborn is the ability for avatars to get married. At launch, only avatars of opposite sex can get hitched, but that may change. Square Enix discussed the matter of same-sex marriage, among other topics, in a nearly two-hour video posted to YouTube. A representative from the company said Square Enix has … END_OF_DOCUMENT_TOKEN_TO_BE_REPLACED

Really good book.  I really love the style that this book is written, it’s believable and captivating because of that.  I love most of the characters in this book.  I mean Letty bothers me because she just appears so needy!  I mean come on, reality is what it is, that doesn’t mean you have to whine about everything.  Although as the story progresses her character … END_OF_DOCUMENT_TOKEN_TO_BE_REPLACED