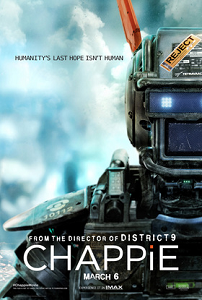 The movie follows the same aesthetic as District 9. However, with fewer interviews to propel the story forward. Dev Patel plays a genius scientist, creator of the S.C.O.U.T. bots, a robotic police force. This movie explores the human condition: what it means to be human and what it means to have an identity.

The film follows Dev Patel, a scientist as he works in secret to create the first artificial intelligence, but then Ninja, Yolandi and Amerika (Jose Pablo Cantillo) kidnap him. Of course, things don’t turn out the way they had hoped. The film takes this idea of identity and explores it through the events of the film. Chappie is a child; he starts out as a child and becomes this new person, this dangerous person, with the ideas of right and wrong morphed to make him the ideal killing weapon. However, the concept of Nurture, captured expertly by Yolandi Visser, builds this character into a person who cares, a robot who loves and learns right from wrong through the act of love. It is heartwarming, to see these characters together, to see the Nature vs. Nurture concept.

The way the story was told and the way it progressed to the final climatic moment when Hugh Jackman lets his hatred consume him to become the evil Robocop, because yes, the robot looks like the big evil robot from the original Robocop series. That would be the only fault in the creative uniqueness of the film. However, his character evaluates the good and the bad. His robot runs by a human psyche connection, his whole motivation is that the S.C.O.U.T. bots aren’t good because they have no human psyche, they don’t know or feel what humans do. Yet, when he makes his move, he is without morality; he is cruel, psychotic even. Nature vs. Nurture, His nature turned him into this hateful, greedy, violent person and the Nurture Chappie received turned him into a caring person, per se.

The story brings so much to the table and takes a stab at analyzing the social construct of raising a child, how the environment and how parents shape their child’s identity. It is written well and the cast was picked out perfectly, filling in the roles of the film with great chemistry. They all fit together perfect and Yolandi shined on the screen with her characterization. The acting was amazing and her kindness, her heart and strength made her a beautiful character.

Deep, thought provoking and action packed, this movie, while not as good as District 9, Chappie is a well-made film with a captivating story.

Based on Tetra Vaal by Neill Blomkamp