Hey there avid readers! I’m still slightly sick, just a cough here and there, and I have my voice back, thank goodness. I seem to be back at 4 books behind in my Goodreads reading challenge, just when I was starting to get caught up. I also bought myself this notebook called The Book Lover’s Journal to help me with my reviews. I really like it. I’m hoping this will help my quality of reviews goes up. So on that note, check out this weeks reading list. Happy reading. 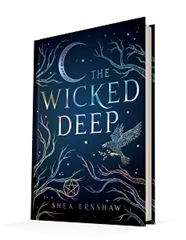 Welcome to the cursed town of Sparrow…

Where, two centuries ago, three sisters were sentenced to death for witchery. Stones were tied to their ankles and they were drowned in the deep waters surrounding the town.

Now, for a brief time each summer, the sisters return, stealing the bodies of three weak-hearted girls so that they may seek their revenge, luring boys into the harbor and pulling them under.

Like many locals, seventeen-year-old Penny Talbot has accepted the fate of the town. But this year, on the eve of the sisters’ return, a boy named Bo Carter arrives; unaware of the danger he has just stumbled into.

Mistrust and lies spread quickly through the salty, rain-soaked streets. The townspeople turn against one another. Penny and Bo suspect each other of hiding secrets. And death comes swiftly to those who cannot resist the call of the sisters.

But only Penny sees what others cannot. And she will be forced to choose: save Bo, or save herself.

2. Lies You Never Told Me

Gabe and Elyse have never met. But they both have something to hide.

Quiet, shy Elyse can’t believe it when she’s cast as the lead in her Portland high school’s production of Romeo and Juliet. Her best friend, Brynn, is usually the star, and Elyse isn’t sure she’s up to the task. But when someone at rehearsals starts to catch her eye–someone she knows she absolutely shouldn’t be with–she can’t help but be pulled into the spotlight.

Austin native Gabe is contemplating the unthinkable–breaking up with Sasha, his headstrong, popular girlfriend. She’s not going to let him slip through her fingers, though, and when rumors start to circulate around school, he knows she has the power to change his life forever.

Gabe and Elyse both make the mistake of falling for the wrong person, and falling hard. Told in parallel narratives, this twisty, shocking story shows how one bad choice can lead to a spiral of unforeseen consequences that not everyone will survive. In the year 2045, the reality is an ugly place. The only time teenage Wade Watts really feels alive is when he’s jacked into the virtual utopia known as the OASIS. Wade’s devoted his life to studying the puzzles hidden within this world’s digital confines, puzzles that are based on their creator’s obsession with the pop culture of decades past and that promise massive power and fortune to whoever can unlock them. When Wade stumbles upon the first clue, he finds himself beset by players willing to kill to take this ultimate prize. The race is on, and if Wade’s going to survive, he’ll have to win—and confront the real world he’s always been so desperate to escape.