Hey there avid readers. I hope everyone is having a wonderful week. Lately I’ve been watching Reading Rainbow with my little one. Luckily, they are on Amazon Prime. They aren’t in order…or complete, but they are something I’m glad to share with my son. So, my days are filled with diaper changes, feedings and Reading Rainbow while I spend my nights reading Grimm’s Fairy Tales until my little kid falls asleep. That’s when I squeeze in my own reading from my TBR list

So, on that note check out my latest reading list. Happy reading!

Ivy Gamble has never wanted to be magic. She is perfectly happy with her life—she has an almost-sustainable career as a private investigator, and an empty apartment, and a slight drinking problem. It’s a great life and she doesn’t wish she was like her estranged sister, the magically gifted professor Tabitha.

But when Ivy is hired to investigate the gruesome murder of a faculty member at Tabitha’s private academy, the stalwart detective starts to lose herself in the case, the life she could have had, and the answer to the mystery that seems just out of her reach 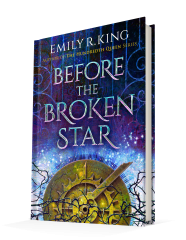 2. Before the Broken Star (The Evermore Chronicles #1)

A fierce young female adventurer battles time itself to claim her destiny in a sweeping new fantasy saga from the author of the Hundredth Queen series.

Everley Donovan is living on borrowed time. The lone survivor of her family’s unexplained assassination, she was saved by an ingeniously crafted clockwork heart. But the time she was given won’t last forever. Now, every tick-tock reminds her how fragile her existence is and hastens her quest to expose Killian Markham, the navy admiral who shattered her world and left her for dead. But Everley’s hunt for justice will be a long and hard-won voyage.

Her journey takes her to a penal colony on a cursed isle, where she will be married off and charged to build the new world. It is here, and beyond, that hidden realms hide, treasures are unearthed, her family secrets are buried, and young love will test the strength of her makeshift heart. When Everley discovers Markham may not be who he seems, her pursuit for truth is bound to his redemption, her tragic history, and her astonishing destiny.

Bestselling adult author of The Bear and the Nightingale makes her middle grade debut with a creepy, spellbinding ghost story destined to become a classic

After suffering a tragic loss, eleven-year-old Ollie only finds solace in books. So when she happens upon a crazed woman at the river threatening to throw a book into the water, Ollie doesn’t think–she just acts, stealing the book and running away. As she begins to read the slender volume, Ollie discovers a chilling story about a girl named Beth, the two brothers who both loved her, and a peculiar deal made with “the smiling man,” a sinister specter who grants your most tightly held wish, but only for the ultimate price.

Ollie is captivated by the tale until her school trip the next day to Smoke Hollow, a local farm with a haunting history all its own. There she stumbles upon the graves of the very people she’s been reading about. Could it be the story about the smiling man is true? Ollie doesn’t have too long to think about the answer to that. On the way home, the school bus breaks down, sending their teacher back to the farm for help. But the strange bus driver has some advice for the kids left behind in his care: “Best get moving. At nightfall they’ll come for the rest of you.” Nightfall is, indeed, fast descending when Ollie’s previously broken digital wristwatch, a keepsake reminder of better times, begins a startling countdown and delivers a terrifying message: RUN.

Only Ollie and two of her classmates heed the bus driver’s warning. As the trio head out into the woods–bordered by a field of scarecrows that seem to be watching them–the bus driver has just one final piece of advice for Ollie and her friends: “Avoid large places. Keep to small.”

And with that, a deliciously creepy and hair-raising adventure begins.