Review of ‘The Surface Breaks’ 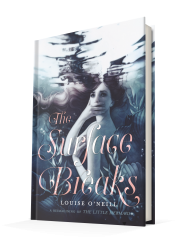 Gaia seeks an escape from her controlling and abusive father, the king of the sea. When she rescues a boy from the sea wreak, she sees a chance to escape, find love, and be happy. But it will cost her dearly. The Surface Breaks is a modern reimagining of Hans Christian Andersen’s original fairy tale filled with a strong feministic tone and dark undercurrents.

Published by Scholastic Press, The Surface Breaks by Louise O’Neill is a YA retelling with a feminist lens for a modern audience.

An empowering read that challenges the place of women in society.

The Surface Breaks is a retelling of the classic Little Mermaid with dark undertones that showcase the worst parts of misogyny. Gaia is the main character, the youngest of her siblings who lives under the iron thumb of her horrible father. He is the core of the sexism in this novel because he not only pits his daughters against one another to keep them down, but he also critiques their appearance in the worst possible ways. Through his attitude and horrible treatment, he strips away their voices.

The men in the novel, both from under the sea to land don’t see women. There are a few decent male characters that give a realistic scope, and then there are vile men who abuse women. But then there are characters who are more self-centered than anything else. It is such a fault of human to see only what they want to see and that goes for Gaia as well. By doing this O’Neill has given more depth to the story and sets up argument against the love at first sight trope. It is a tragically wonderful story that has many tough moments for the reader because O’Neill doesn’t shy away from the cruelty and abuse that these women endure. It is not only Gaia who suffers, it is all the women and in various ways. Abuse comes in many forms for these characters ranging from the physical and going to the emotional and the mental. It allows the reader to think and evaluate the characters making the story quite thoughtful as it addresses these elements.

It is a tough story to read only because O’Neill does not shy away from the tougher elements. She goes one step further and takes some elements from the classic tale and gives them graphic detail. It is symbolic and does serve a purpose for the storytelling, it isn’t just there for shock value and does keep to the appropriateness of the reading age. Everything in the novel serves a purpose and allows the story to evolve and the characters to grow. It is a powerful story that challenges the sexism that women often endure and leaves a lasting impression on the reader. (★★★★☆)