Hey there avid readers! I hope everyone had a wonderful Halloween. It was my first anniversary with my husband but before me and the hubby when to dinner I dressed up as Alice in Wonderland and dressed my little man as a white rabbit. We were adorable. And of course we ended the da together as a family watching The Nightmare Before Christmas and I even bought a copy of that story as a book and read it to my son later that night.

It was a fun way to spend the holiday.

But other than that, check out my latest reading list and let me know what you think about these titles. Let me know in the comments below and tell me what is on your reading list. Happy reading! 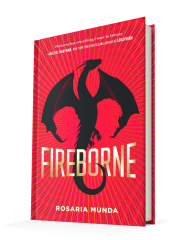 Annie and Lee were just children when a brutal revolution changed their world, giving everyone—even the lowborn—a chance to test into the governing class of dragonriders.

Now they are both rising stars in the new regime, despite backgrounds that couldn’t be more different. Annie’s lowborn family was executed by dragonfire, while Lee’s aristocratic family was murdered by revolutionaries. Growing up in the same orphanage forged their friendship, and seven years of training have made them rivals for the top position in the dragonriding fleet.

But everything changes when survivors from the old regime surface, bent on reclaiming the city.

With war on the horizon and his relationship with Annie changing fast, Lee must choose to kill the only family he has left or to betray everything he’s come to believe in. And Annie must decide whether to protect the boy she loves . . . or step up to be the champion her city needs.

From debut author Rosaria Munda comes a gripping adventure that calls into question which matters most: the family you were born into, or the one you’ve chosen.

Generations of twin goddesses have long ruled Aeon. But seventeen years ago, one sister’s betrayal defied an ancient prophecy and split their world in two. The planet ceased to spin, and a Great Abyss now divides two realms: one cloaked in perpetual night, the other scorched by an unrelenting sun.

While one sister rules Aranth—a frozen city surrounded by a storm-wracked sea —her twin inhabits the sand-locked Golden City. Each goddess has raised a daughter, and each keeps her own secrets about her sister’s betrayal.

But when shadowy forces begin to call their daughters, Odessa and Haidee, back to the site of the Breaking, the two young goddesses —along with a powerful healer from Aranth, and a mouthy desert scavenger —set out on separate journeys across treacherous wastelands, desperate to heal their broken world. No matter the sacrifice it demands.

When the world doesn’t want
you to be who you are,
you must become more yourself
than you knew you could be.

London. 1789. More than anything in the world, Wendy Darling wants to be the captain of a ship, but women aren’t allowed in the Royal Navy. When she learns the Home Office is accepting a handful of women into its ranks, she jumps at the chance, joining the fight against the most formidable threat England has ever faced. Magic.

But the secret service isn’t exactly what she hoped. Accompanied by a reimagined cast of the original Peter Pan, Wendy soon discovers that her dreams are as far away as ever, that choosing sides isn’t as simple as she thought, and that the only man who isn’t blinded by her gender might be the worst friend anyone could ask for.