All Your Twisted Secrets by Diana Urban is a thrilling YA debut reminiscent of And Then There Were None.

All Your Twisted Secrets is an excellent debut, capturing the essence of Agatha Christie an exhibiting the storytelling with a sinister edge. This novel gathers six people together and traps them in a room, trapping them. All Your Twisted Secrets was honestly such a quick read because it is gripping. It moves from the present to the past, but it does so in a way that keeps the reader engaged in the story. It does not break pace and gives the story more dimension because it allows the reader to understand the characters and the dynamics between them.

As for the characters, thankfully, they are all likable to some degree. It is realistic regarding their dynamics and the use of the high school hierarchy. The way the characters move and navigate their high school lives is realistic, if a little dramatic, so the reader just needs to suspend their belief just a little bit. However, the stressors that affect the characters are stressors that are relatable. What also makes this an impactful story is how it discusses bullying, both online and physical bullying. Bullying comes in many forms, and Amber discusses dealing with being a bystander. Witnessing bullying and doing nothing, rationalizing it, it is just as bad as being the bully. Staying silent makes Amber just as culpable, and she comes to realize that. Faced with all their secrets, they begin to realize just how cruel they can be in their small actions.

All Your Twisted Secrets is a thoughtful read. It takes on an element of The Breakfast Club and gives it a thrilling twist that not only addressed an important topic but is addicting. (★★★★☆)

All Your Twisted Secrets 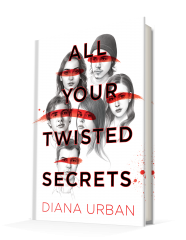