A Curse So Dark and Lonely is an excellent re-spin of the classic Beauty and the Beast. What made this story feel so fresh was its modernity to it. It blends the real world and the fantastical world thoughtfully. Firstly, Harper is from Washington D.C. and is kidnapped and brought to the world of Emberfall, a mystical land. Harper is truly a force to be reckoned with as she tries to reconcile her new reality, that magic has trapped her in this world where the prince’s hopes lie with her.

Their dynamic is fresh because even though they both know that she has to fall in love with him in order to break the curse, they are not forcing that on each other or the reader. The very idea of whether they do fall in love is left entirely up in the air. However, they have such a strong dynamic with one another that makes them unique. Harper spends most of the novel trying to help Prince Rhen try to gather his kingdom together with false promises, an alliance with the kingdom of DC. They play off each other and grow stronger together. Rhen has lived in fear of the monster and the curse, letting it control him and forget his kingdom, but now he has the chance to rally his kingdom together in the hopes of preventing war.

It is a compelling idea brought to life by careful pacing and development. What is also great about the novel is that the curse was not placed there by a fairy in the hopes of teaching him a lesson; the curse was because he spurned the wrong woman. Lilith is a malevolent force to be reckoned with and her voice captures that. She works as the perfect foil for Harper, and together they give the depth of the curse a new dimension instead of letting it become repetitive.

The novel may be a retelling of Beauty and the Beast, but many things make it different and wholly unique. The structure of the magic, the world-building, and the added element of an invading army give the idea some freshness to it and make it an exceptional and stand-out retelling.

A Curse So Dark and Lonely 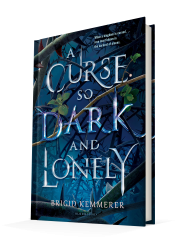